So I feel a little pressure, here.  A little gravity, if you will.  Fr. Michael wrote about his thoughts about Gravity in “Our Pastor’s Corner”.  Fr. Emmanuel preached about it on the 33rd Sunday of Ordinary Time.  And now, it’s my turn. 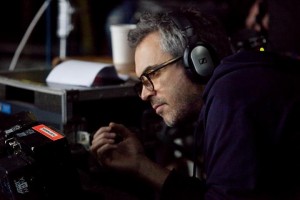 Gravity is a Catholic movie.  Director Alfonso Cuarón (who directed Harry Potter and the Prisoner of Akaban) did a wonderful job in proposing many Catholic themes in a surprising, integrative, and subtle way.  Cuarón, a highly visual artist, he doesn’t rely on snappy dialogue or technical swipe cuts to get his points across—he uses the camera and what the camera sees.  He manipulates his screen images to add depth of an already deep movie.  I will do my best to offer some thoughts with trying to refrain from as many spoilers as possible.  So here are a coupla thoughts….

Baptismal Imagery.  It basically comes in three parts.  Part one is right after Sandra Bullock’s character (Dr. Ryan Stone) reenters a safe haven.  She gets into the station, and whips off her space suit, and assumes a fetal position.  Moreover, tubes are in the background and start to play behind her, parallel to where her bellybutton is.  Now, one might think that this just happens and the movie moves on.  But the camera stays there.  We are forced to watch Bullock’s character lay in space, in his fetal position.  Cuarón tells us, “Look at this!  This is important!”  Thus, I say, the character had been reborn into a new experience.  At the beginning the second act of the movie, she is born into a new character and a new adventure. 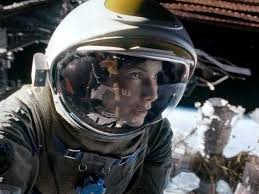 Part two is the fire incident.  She deals with the fire, and it brings her into a new way of being, forcing her to adapt and live in a new environment. Fire, of course, is a favored image of the Holy Spirit.  Unpredictable and forceful, the Holy Spirit invites us to new environments, new ways of looking and things, new ways of living.  The Doctor is thrown into a new living environment, into a new suit, and a situation.  The fact that she bleeds is no a hidden symbol here—her life is being given into a new adventure.

Moreover, she also learns new virtues (gifts of the Holy Spirit), bravery, prudence and faith.  Bravery for persevering in a very tight situation, prudence for knowing how to adapt with the next crisis and faith in knowing that she will return home. (In fact, by this time, we want her to come back to the planet—but really, who here really thought that that ending would actually happen?)

Part three is the water incident.  It’s really difficult, by the way, to refer to this without suggesting spoilers.  To put it mildy, she almost dies.  In fact, when I watched it in the theatre, a woman yelled out, “She’s been through too much already!”  She has to take that last gulp of air and kick off the pod and come to the surface. And once she arrives to clean air, she gasps a giant breath, as though she were drowning.

And of course…we remember the kind environment she falls into, right?  …must I be more explicit?  Well, you have my email.

Patron saints. This was actually really fun to see.  I saw it in two places.  For one, with the George Clooney

(Matt Kowalsky) character.  What a great foil!  Coming into the ship, telling her to not worry.  We kinda know that his character is floating out there and breaking space-walking records.  But we suspend our belief, wondering—maybe, just maybe that he is really present.

Prayer.  Upon the third ship—and must I remind you what “3” symbolizes?—when Ryan is to talking to Matt and describes her daughter, telling her comb her hair and take care of herself and that mommy misses her?  …sounds like a spontaneous prayer to me.  I mean, she may be oxygen deprived, but perhaps she may be learning how to pray.  Or better, she may be praying, and she doesn’t even know it.

In my opinion, spontaneous prayers from our hearts may hold God’s attention more effectively than a thousand rosaries.

Cuarón designed a Catholic movie.  He did it the best possible way.  He wasn’t preachy.  He didn’t blare the Catholicism up the audiences’ eyes—it wasn’t heavy handed at all, to his credit and his artistic skill.  Yet he was unapologetic.  He fronted Catholic ideas on a secular stage and he came out a success. God bless him.

Catholic artists, take note.  This is how you preach in an artistic way.