Home→Uncategorized→Saint of the Day: Saint Catherine of Alexandria 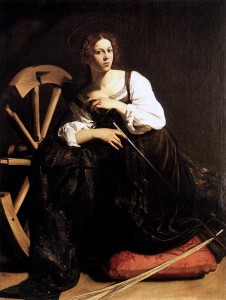 St. Catherine is believed to have been born in Alexandria of a noble family. Converted to Christianity through a vision, she denounced Maxentius for persecuting Christians. Fifty of her converts were then burned to death by Maxentius.

Maxentius offered Catherine a royal marriage if she would deny the Faith. Her refusal landed her in prison. While in prison, and while Maxentius was away, Catherine converted Maxentius’ wife and two hundred of his soldiers. He had them all put to death.

Catherine was likewise condemned to death. She was put on a spiked wheel, and when the wheel broke, she was beheaded. She is venerated as the patroness of philosophers and preachers. St. Catherine’s was one of the voices heard by St. Joan of Arc.

Saint Catherine is a secondary patron of the Dominican Order because of her devotion to philosophy.