Home→Movies→“Catching Fire” & the Kingdom of God 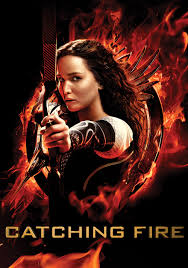 Recently, I overheard a conversation in which people were talking down the movies, saying that they are instruments of gratuitous violence.  The argument stemmed that the world is a cold, awful enough place as it is, and really, why should we watch and promote films that bring our spirits, down, down, down?

And to a point, I agree with the conversation.  Christians—at our best—are a hope-filled people, children of the Resurrection.  We are people with our hearts and minds focused on the face of our God.  We trust in a God who will never let us down, a Father who will always keep his promises, and a God who knows us so intimately that he provides us with what he need at the perfect moment.  So yes—why ought we focus on downtrodden movies?  They have a point.

Admittedly, though, when I heard the aforesaid conversation, I rolled my eyes (I never said 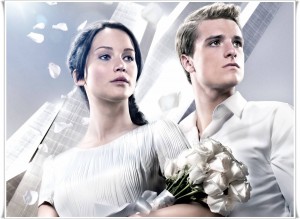 that I am a nice person) I thought, You fools.  You fell right into the trap.  Right.  Into.  The. Trap.  In fact, if you have read the books, the first thing you would notice that author Suzanne Collins is doing is rallying against reality television, child violence, media manipulation, and propaganda.  The purpose of the books was to elucidate and project onto a wide screen the very thing that makes our society weak—the objectification of the young, propagandistic manipulation, entertainment for entertainment’s sake, a squandering of resources, and the list goes on and on.  The Hunger Games trilogy is a story about a normal girl trying to protect her family—the whole gratuitous violence thing is exactly what Collins is rallying against.

Now, I’m not writing this simply because it stirred my pot. 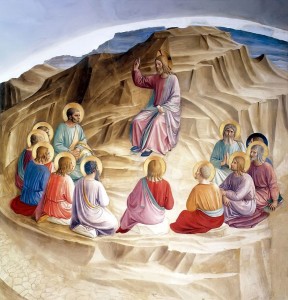 It may be easier to be feared, but it is much better to be loved.

Thankfully, the Kingdom of God is not Panem.  Christians at our best are a people responding to the invitations of Jesus Christ to dwell deeper in faith, hope and love.  Children of the Resurrection, we are formed by the radical example of the Son of God, loving desperately and passionately to the point of dying to our selfish ways.   We are not ruled by a sadist, but by a The Crucified.  He invites us to love and to love in the most extreme of ways.

Collins does not give into a world of gratuitous violence, manipulation and media fanaticism.  Rather, she forces us to look into the mirror, and forces us to answer for the manipulations we make of our own selves.  How do we use each other for our own selfish gain?  How are we killing our society and our own children?  How are we murdering the innocent youth of our times?

I say that we ought look into our own world and propose the Gospel message of compassion and innocence and the awe of God.  A beautiful sunset or a late-night conversation resonates much easier than the murder of a child.  If I were to choose my Kingdom, I think it would be God’s…