Home→Uncategorized→A Preview to the Ceremony of Carols Christmas Concert

Our Christmas Concert (Monday, December 16, 7:30 pm – see you there) includes a wonderful piece of music In Terra Pax (Peace on Earth) by Gerald Finzi.  Here are some notes to guide your listening and the text for you to enjoy: 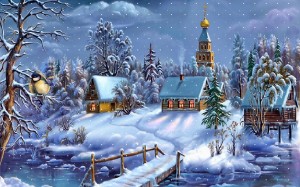 Finzi’s musical inspiration sprang primarily from his love of literature and the English countryside – the same sources that inspired Elgar and Vaughan Williams. In Terra Pax was composed in 1954 and was almost the last piece that Finzi wrote, though its genesis can be traced to an event some thirty years previously, when one Christmas Eve he had climbed up to the church at the top of his beloved Chosen Hill, between Gloucester and Cheltenham. The sound of the midnight bells ringing out across the frosty Gloucestershire valleys evidently made a lasting impression on him, retrospectively providing the idea for In Terra Pax, as he told Vaughan Williams.

The work is a setting of two verses from Robert Bridges’ fine poem, ‘Noel: Christmas Eve, 1913’, subtitled Pax hominibus bonae voluntatis (Peace and goodwill to all men), which Finzi imaginatively and skilfully uses to frame St Luke’s account of the angels’ appearance to the shepherds. In Terra Pax is subtitled ‘Christmas Scene’, and Finzi explained that ‘the Nativity becomes a vision seen by a wanderer on a dark and frosty Christmas Eve in our own familiar landscape’. This placing of the Biblical story into an English pastoral context is entirely consistent with Finzi’s close affinity with the English Romantic tradition, and his lifelong dedication to the creation of his own rural paradise at his home in Ashmansworth, near Newbury.

The two soloists and the chorus have clearly defined musical roles; the baritone soloist takes the voice of the poet, the soprano is cast as the angel, whilst the chorus narrates the familiar biblical text. In the opening section the poet is standing on a hill contemplating the events of the very first Christmas, the sound of the distant church bells becoming for him the sound of an angel choir. This image is expressed in a pealing-bells motif which, together with the refrain from ‘The First Nowell’, provides the musical fabric of the piece.

A frosty Christmas eve
When the stars were shining
Fared I forth alone,
Where westward falls the hill
And from many a village
In the water’d valley,
Distant music reached me
Peals of bells a-ringing:
The constellated sounds,
Ran sprinkling on earth’s floor
As the dark vault above,
With stars was spangled o’er.

Then sped my thoughts to keep,
That first Christmas of all
When the shepherds watching
By their folds ere the dawn
Heard music in the fields
And marveling could not tell
Whether it were angels
Or the bright stars singing.

And there were in the same country shepherds abiding in the field,
keeping watch over their flock by night. And, lo, the angel of
the Lord came upon them, and the glory of the Lord shone round
about them: and they were sore afraid. And the angel said unto them:

“Fear not: for, behold, I bring you good tidings of great joy,
which shall be to all people. For unto you is born this day in
the city of David a Savior, which is Christ the Lord. And this
shall be a sign unto you; Ye shall find the babe wrapped in
swaddling clothes, lying in a manger.”

And suddenly there was with the angel a multitude of the
heavenly host praising God, and saying:

“Glory to God in the highest and on earth peace, good will 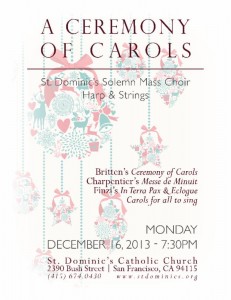 toward men
But to me heard afar
It was starry music.
Angels’ song, comforting
As the comfort of Christ
When He spake tenderly,
To His sorrowful flock:

The old words came to me,
By the riches of time
Mellow’d and transfigured,
As I stood on the hill
Heark’ning in the aspect
Of th’ eternal silence.

And on earth peace, Good will toward men.

All are invited to our Christmas concert on Monday, December 16, 7:30 pm in the Main Nave.