Home→Advent→Why is Christmas on December 25? 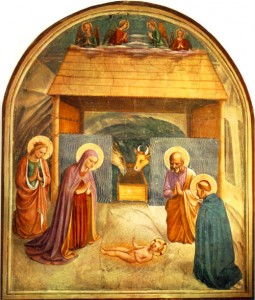 Why is Christmas December 25?  There is one theory saying that, in the early Church, December 25 was the feast of the Roman Sun god.  This is reasonable—we are, in a way, baptizing these Roman feasts.

However, for me, this is not a good reason. Basically, the reason I’m not a fan of this reasoning is because….it’s not a Jewish reason. It is not a reason embedded with Jewish undertones or with Jewish liturgical praxis.  Jesus is Jewish—why would Jesus care about some pagan, non-existent god?

The Church Fathers, pondered this question rather well. Many of the Church Fathers, linked Jesus’ death—Good Friday—with His Incarnation.  In other words, some patristics linked Jesus’ Incarnation, the feast of the Annunciation, to the day he died on the cross.  His Nativity is explicitly linked to his Annunciation, which is explicitly linked his Passion. Tertullian reported an estimate that the 14th of Nisan was on March 25.

This idea appears in an anonymous Christian treatise titled On Solstices and Equinoxes, which appears to come from fourth-century North Africa. The treatise states: “Therefore our Lord was conceived on the eighth of the kalends of April in the month of March [March 25], which is the day of the passion of the Lord and of his conception. For on that day he was conceived on the same he suffered.” Based on this, the treatise dates Jesus’ birth to the winter solstice.

Augustine, too, was familiar with this association. In On the Trinity (c. 399–419) he writes: “For he [Jesus] is believed to have been conceived on the 25th of March, upon which day also he suffered; so the womb of the Virgin, in which he was conceived, where no one of mortals was begotten, corresponds to the new grave in which he was buried, wherein was never man laid, neither before him nor since. But he was born, according to tradition, upon December the 25th.” 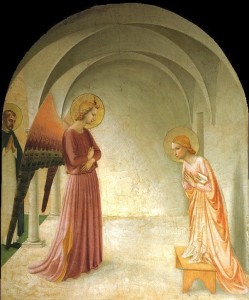 That the day Jesus was sacrificed on the cross was the day that the Angel Gabriel visited Mary.  March 25.

Thus, 40 days later, he would be presented in the Temple.  Feast of the Presentation.  February 2.

There is also another reason people front December 25 as Christmas. December 25 is roughly the winter solstice, the shortest day of the year.  June 24, the date of the summer solstice, is the longest date of the year.  John’s most important saying is that I must decrease, so He must increase.  John, the prophet of the Lord, is decreasing so that the Light of the World, Jesus Christ, may increase and be the light of the World.

Please refer to this link.  I thank Biblical Archeology for this insight.