There is no such thing as a typical day in the life of a priest.

Yet, I would like to share with you my Wednesday.  This was last Wednesday, day the Pilgrim Statue of Our Lady of Fatima had visited.  It was a lovely event, filled with peace and devotion, but I am getting ahead of myself. 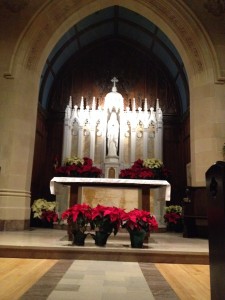 The morning was typical—Mass, Office of Readings and Morning Prayer, cup of coffee, meetings.  However, I was also “on call”.  There are three hospitals and a gaggle of nursing facilities on our geographic zone.  I don’t think our congregation realizes this.  Being “on call” means that the priest is scheduled to deal with walk-ins and sick calls or death calls from the hospitals or homes. It’s a day that screams for randomness, and randomness is what we got.

It began around 12:15.  I was in the refectory—I made a nice sandwich for lunch, a little salad.  It was so nice. I had just sat down, and just started to bit into my sandwich…and just then, I was called from a nursing facility saying that a long term patient was expiring.

“Oh no,” the nurse replied, “You can have you lunch first.  The family had already left.”

Now, try to comprehend the incomprehensible with me.  I was just told that someone was dying.  Yet the family had already left. Something funny was going on.

I finished my bite, grabbed the oils of the sick, and walked over.

Once I got there, the nurse wasn’t telling me the whole story….  Indeed, the patient was dying.  Indeed, we are all dying from the moment we are born.  God knows the day we make our return trip home.  As with this patient…let’s just say that she was sleeping with the Lord before she fell asleep in the Lord.  The moment was almost ethereal, hearing the monitors go bleep bleep bleep and boop boop boop as she laid in her hospital bed asleep.  It was almost angelic.  It was almost musical.  It was almost a lot of things.

I anointed her and prayed a Prayer of Commendation over her, as requested, all alone.  Seeing that there was no one else to talk to—even the nurses were busy with other things—I walked back to the Priory.  I returned to the house, wrote up the report, and just as I was putting things away, the on-call phone rang again, telling me that a person would like confession. 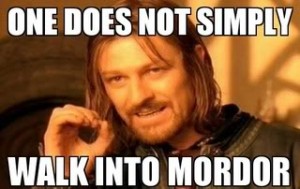 When I made it to the office, I saw a man speaking with the front desk personnel.  He reminded me of Boromir from The Lord of the Rings.  Tall, strong, boisterous personality, hands the size of dustbins, callouses and all. I was expecting him to carry that horn on his side or to talk to me in a Tolkien-esque English.  Call me a hobbit and demand food.  Or call me an orc and slay me. Something like that.

…but what a powerful moment it was.

Now, remember reading the Gospel of Mark?  And every other paragraph begins with the word “immediately” or “suddenly” or “just then”?

The moment the penitent left, the front desk handed me a slip from one of the hospitals.  Someone else needed to be anointed.

Instinctively, I looked at the clock and laughed.  I’ve been running around like a track star.  So I went to my office, grabbed my oils and walked out the door.

It’s easy to be go-go-go and not appreciate the weather.  I know, we need rain.  But it was so pretty outside….  I was thankful that I breathed in the fresh air, gazed upon the bright blue sky, and prayed for the patient in whom I was called to seek.

I zigzagged though the hospital and made it to the floor.  After negotiating with the nursing staff, I was sent into a room full of laughter.  I had to knock on the door four times till someone had responded.  I have to admit, I had an odd feeling about this visit.  Someone needed to be anointed, yet the patient was surrounded by laughter.  It was such an odd situation.  I was expecting depression, loneliness and darkness.  Frankly, that is usually what you get.  I was hardly expecting to wait outside the hospital room door all of that time because the people inside were too busy laughing.  It was a good problem to have. 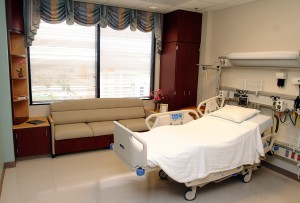 That was till I entered the room.  Within a pair of moments, the room was cleared and the patient and myself had some quality time together.  She looked at me, and all of her laughter, her composure, her smiling demeanor…vanished.  She told me about her procedure and she told me her low survival rate.  Most importantly, she wanted me to help her prepare for death.  In front of me was a Dead Woman Lying.

Thankfully, training kicked in and I knew what she needed.  I called in the patient’s friends and we shared in the Sacrament.

By this time, Evening Prayer at the parish was to start fairly soon.  I rushed back to the house.

I had thanked God that someone else was had the 5:30 Mass.  After Evening Prayer, I had hoped to grab a nap.  Or lunch.  Neither happened.  …in retrospect, I have no idea what happened to my sandwich.  I’m sure someone else ate it by now….

At 6:00, I was told that the Pilgrim Statue of Our Lady of Fatima will arrive.

I had been looking forward to the Pilgrim Statue’s visit for quite the while.  We were approached months ago by the chancery about her coming to us.  Such a beautiful opportunity.  I am so grateful to our Young Adult leadership team because they were open to reschedule their events in order to host the night.

The evening was a cacophony of activity.  The presentation of the statue, the presentation given by Carl Malburg, the giving over of the relics of Blessed Teresa.  Mass, of course.  Seeing the people’s devotion…wonderful.  But the one thing I do remember is…peace. 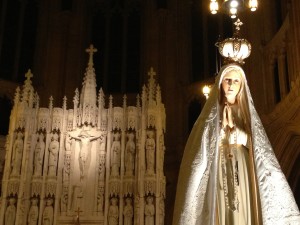 It is fitting, of course, that on the anniversary of the decision of Roe vs. Wade, an image of Our Lady of Fatima would visit our parish.  Our Lady, our Mother, offering us words of peace and wisdom and encouragement.  On the anniversary of the day our country opted for convenience rather than family, we remember the Mother of God visiting three young children who lived in the middle of no where.

A beautiful image sat in front of me as I had witnessed the unfolding of the night.  Seeing the throng of Mary’s children in front of the image.  Yes, some of them certainly wanted to see the statue cry.  Some were there out of curiosity.  Some where there because the Young Adult email said that people were getting food after Mass.  Fine.  Overall, the devotion and peace of the night.  Small moments of silence.  People waiting patiently to kneel at her feet.  Offering flowers and prayers of thanksgiving and supplication.  The look in people’s eyes as they gazed at the statue.  So many people wanting to immortalize the moment by taking pictures of the statue.  People purchasing pamphlets, devotionals, holy cards, scapulars…and tugging at me or Fr Michael for a blessing.  The People of God, joyfully wasting time with their mom.

Just after 9:00, the Dominican Community closed the night with Compline, Night Prayer.  We found it a fitting way to close, because the end of Night Prayer is the Salve Regina.  How else would Mary’s sons like to end the night by serenading the Mother of God?

It was such a powerful day.  For me, it was a day filled with life and death.

After over eighteen hours of running around from meetings, to hospitals, to nursing homes, to confessions, to the Church and everything in between, I was ready to collapse.  Honestly, I didn’t want to be in the church—I wanted to be in bed.  But I had a duty to stay.  I was in charge of these events. I was expected to fly.  I was expected to perform.  Demanding as they are, this is what the People of God need and deserve.

But then again, I know that there are many, many parents out there working one or two jobs, barely keeping rent, working and praying and hoping that their children are getting fed and receiving the education that they need.  I know that there are many parishioners that have a worst life than I. People that also have sleepless nights, terrible mornings, good and bad days—people that are carrying burdens that are very, very heavy.

But so did Jesus.

He who was rejected by his own friends, abandoned by weak, hypocritical idiots, constantly pressed upon by weak, jealous, selfish and demanding people.  He who was expected for so many years, yet once he came, was nothing like what the people wanted or expected.  He who died for an overall ungrateful people.  In being Jesus’ role, in persona Christi, a man is guaranteed a life that overflows with life, death, adventure and unpredictability.

If given the call, why would any young man really want to do anything else?