Peter was just trying to do the right thing.

Today, we celebrate the Feast of the Chair of Peter.  We celebrate many things on this day—the charism of unity within the Catholic Church preeminent among them.  However, it’s odd, don’t you think, of the Gospel we get to share today? 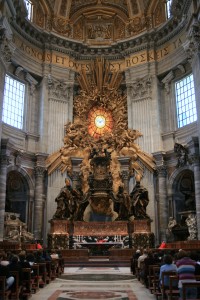 Jesus and his disciples set out
for the villages of Caesarea Philippi.
Along the way he asked his disciples,
“Who do people say that I am?”
They said in reply,
“John the Baptist, others Elijah,
still others one of the prophets.”
And he asked them,
“But who do you say that I am?”
Peter said to him in reply,
“You are the Christ.”
Then he warned them not to tell anyone about him.

He began to teach them
that the Son of Man must suffer greatly
and be rejected by the elders, the chief priests, and the scribes,
and be killed, and rise after three days.
He spoke this openly.
Then Peter took him aside and began to rebuke him.
At this he turned around and, looking at his disciples,
rebuked Peter and said, “Get behind me, Satan.
You are thinking not as God does, but as human beings do.”

It’s an odd gospel.  Peter’s day of glory and condemnation.  One minute, he gets the gold star, and the next, he gets the ruler slapped against his knuckles.  This is the pericope we get for the Chair of Peter?

But let’s think about this for a second.

It’s easy for us to forget that Jesus is fully human.  He had just discerned what awaits him soon after he arrives in Jerusalem.  His death.  In a very human way, the story is not going to end well for the Carpenter.

He is in that odd place where He knows exactly what God wants Him to do, knows how much risk is involved, and has turned His face like flint—knowing that somehow and mysteriously, God will see Him through.  Jesus is terrified, yet He has thrown His lot in with His Father, knowing that His will be done, and not the will of the Son.  He is terrified, yet brave.

Yet after this exchange, notice what we don’t see. After Jesus rebukes the First Pope, we don’t hear Peter, or John, or Mary, or anyone get in Jesus’ way.  After the rebuke, Peter gets back in line, and follows Jesus to the Holy City. 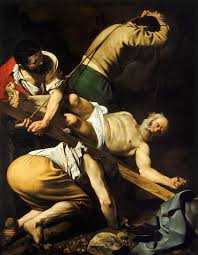 We know that Peter succumbs to weakness that Thursday night.  No, he isn’t there to see Him get scourged.  Nor does he see Him get crowned or die.  Yet, Peter is one of the first people whom Jesus reveals Himself to when He rises from the dead.  He is the one whom Jesus names as the leader of the pack.  The one whom Jesus tells to strengthen the fellowship, to keep everyone together.  It is Peter—not John, not Mary, not Paul—whom Jesus orders to keep everyone unified under the Banner of the Lamb.

The mystery of the chair.  Keeping everyone together, despite the weakness of the men who sit upon it. Knowing that the Pope is just as weak as we are.  Yet after being rebuked and ordered to get in line with everyone else, he is the one whom unites us, keeps us faithful, keeps us together.

May we admit our weaknesses, and find our courage.