Home→Lent→Reflections on the Sacrament of Baptism, part II – “Fulfilling all righteousness”

Last time, we contemplated the question, “Why did Jesus get baptized?”  We continue our contemplation by wondering what the phrase “to fulfill all righteousness” means. 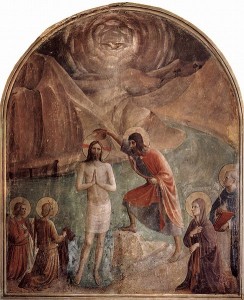 The Baptism of the Lord, Fra. Angelico, OP

“Then Jesus came from Galilee to John at the Jordan to be baptized by him.  John tried to prevent him, saying, “I need to be baptized by you, and yet you are coming to me?” Jesus said to him in reply, “Allow it now, for thus it is fitting for us to fulfill all righteousness.” Then he allowed him.”

The keys to understanding what Jesus is saying to John—and why John is obedient to Jesus—lies in the word ‘righteousness’ and the Jewish priesthood.

(Disclosure: I not have a degree in scripture studies.  I am not, as such, qualified to teach about the sacraments at the University level.  These are my thoughts and my thoughts alone.  Forgive me if I lead you astray.)

There are two lines of priests—Aaronic, and Levitical.

The Aaronic is from Aaron, the brother of Moses.  Moses ordained him and his family to preside over sacrifices and other cultic occasions. There is also the Levitical priesthood, from the tribe of Levi.

When the Chosen People claimed the Holy Land, the Tribe of Levi did not receive a portion of the Holy Land; rather, they were entitled to certain fruits of the land for their cultic service for the people of God.

John’s father, Zechariah, is a priest from the division of Abijah of the clan of Levi, Elizabeth is from the tribe of Aaron.

Because the Jewish priesthood is hereditary, John is a priest—from both sides.

Not only is John the greatest prophet of Israel’s history, he is also, by heritage, a priest on both sides—thus, when John proclaims “Behold the Lamb of God”, he is the first priest of the Old Covenant to acknowledge Jesus as the Christ, and High Priest.

It is the priest—both in the Old and New Law—that are the intermediaries between God and His Chosen People.  Moreover, we remember the terms ‘righteousness’.  In the Torah, the righteous are men and women who are faithful to God’s promises. 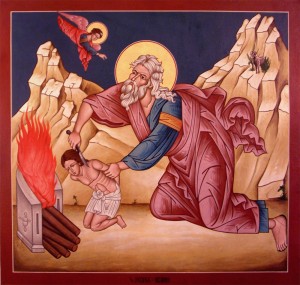 Abraham is considered the righteous one.  Ironically, he doesn’t have a good track record—in Genesis, he twice told his wife to deny that they are married, he cast off Hagar the mother of Ishmael.  Nonetheless, he is called righteous because he was faithful to God’s promises.

He never gave up on the notion that a son will be born from him and Sarah and that this son will be the father of nations.

Abraham is called righteous because he is faithful to the promises that God had given him.

So when Jesus says to his cousin, “Allow it now, for thus it is fitting for us to fulfill all righteousness”, Jesus is doing two things at the same time.

1)      Jesus is submitting himself to all of the Covenants that have been made between the Father and the Chosen People.  Jesus is making himself righteous in the Abrahamic sense—he is submitting his will in order to be obedient to the Abrahamic Covenant in the Mount, the Mosaic Covenant at Sinai, and the Davidic Covenant as spoken by Nathan the Prophet in Jerusalem.  Thus, when Jesus initiates his own Covenant—the Passion, Death, and Resurrection—it is in-line and in the context of the other Covenants made between the Father and the His Chosen Ones.

2)      The priesthood.  It passes from a tribe to a person, Jesus Christ.  The Aaronic and Levitical priesthood—of which John is a member of both via heritage—is flowing from John, the prophet and priest par excellance of the Old Law—into his cousin, the High Priest and Great Prophet of the New Law.

Again, these are my contemplations on the aforesaid topics.  My own prayer and research has gone into these pages, but they are not ex cathedra as such.  I am open and willing to receive any corrections from a proper authority.

We will continue our contemplation on the Sacrament of Baptism, asking what do our ruminations mean for you and me in 2014?