So here’s the deal.  I’ve been in London for about two days, and I get a random message on my Facebook wall – “Contact me ASAP.” It was from Seminarian Michael Lilliedahl, a parishioner of St Dominic’s.  So after a Facebook message conversation–he was in class and I was atop of red double decker bus, overlooking London at night (I have such an odd life)–we pull off something that I thought improbable.

On April 9th and 10th, Lino Rulli, from “The Catholic Guy Show” on the Catholic Channel on Sirius XM, broadcasted live from your favorite Dominican Parish.  Michael, who helped engineer the guys’ visit, was asked to offer a quick reflection on the event.

Thanks for coming, Lino and Fr. Rob!

Sitting in my seminary class a few weeks ago with my laptop open taking notes a pop up alert showed up on the upper right corner of my screen.  “Lino Rulli has sent you a DM on Twitter”.  Hmmm…that can’t really be I thought.  Lino Rulli is the host of The Catholic Guy Show on Sirius XM’s Catholic Channel and somebody I had been listening to for a few years.  “Hey Mike, I’m bringing the show to SF soon and wanted to run an idea by you.  Email me.” 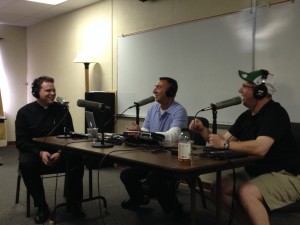 Simple enough.  I emailed him back and soon found out that he was looking for a place to broadcast his international show from while in San Francisco.  My first thought went immediately to St. Dominic’s and after a few emails Fr. Hurley, graciously agreed.  So, last Wednesday and Thursday Lino and his co-host, Fr. Rob Keighron of the Diocese of Brooklyn, set up their travelling radio studio in the Aquinas Room and broadcast from St. Dominic’s parish to the world.  And two people got to go on the air with them-  DRE Michael Smith and myself. 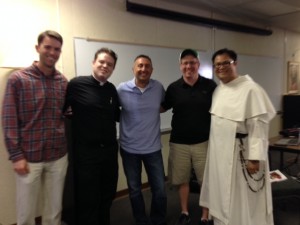 After the April 9 recording

I certainly can’t speak for Michael and his experience, but the nerves I had when I got called up to put on the headset and speak into the mic knowing that possibly thousands and tens of thousands of people were listening were hard to contain.  Speaking out trying to live out my vocation went by very quickly and before I knew it the show was over and I was helping them take apart their set up.  But St. Dominic’s was given a few shout outs and if you listened you hopefully learned a very valuable lesson-  “Beer is not meat”.