Within my first days at Stanford, I had discovered something.  Almost universally, every student at Stanford University has a plan.  Graduate in four years, two years for a Masters, a doctorate, perhaps, work in the industry, create something amazing, then boom!  The world is changed forever.

I mean, this is Stanford.  You don’t get in unless you are a hard-core planner, and/or class-one go-getter.  Determination, discipline, the ability to dream big.

So what would happen within the first year of an undergraduate’s life at the university is that they would figure out how difficult Organic Chemistry is?  Or how awful Introduction to Humanities is (which is now a passed-away requirement, apparently).  Or living in a dorm.  The ability to stay awake till 3 in the morning talking about Star Trek or Downton Abbey or a Capella or…something.  Or that, guess what—you’re surrounded by geniuses and most likely, you’re going to get your first “B” in the history of your life.

In short, your plan gets short-circuited.  The outline of your life meets Reality and Reality ain’t playing fair.  You have to change your plan.

And there is a cause of consternation here.  Expectations have been thwarted.  What you had expected is not coming together.  Life is not unfolding the way it was supposed to. 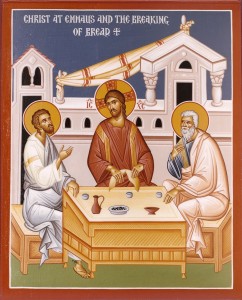 This Sunday’s Gospel is the Road to Emmaus.  The disciples in this weekend’s Gospel had expectations.  They had been expecting that the Christ was going to lead an army to overthrow Rome.  Get rid of Herod and get a real Jewish King on the throne.  Teach the Sanhedrin true Orthodoxy and Orthopraxis.  Jesus was supposed to ride the winds and be the physical manifestation of “amazing”.

He died.  Badly.  And most likely, everyone sitting around him where going to be next.

Funny thing, though.  Jesus did lead an army.  He did get a new King on the throne.  He did teach orthodoxy and orthopraxis.  He did ride the winds.  He is the manifestation of “amazing”.

But not in a way we had expected. 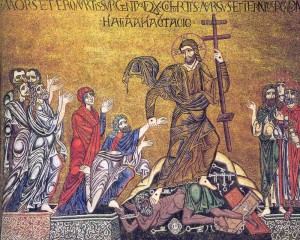 On the actual Holy Saturday, we traditionally believe that Jesus partook of what we call “The Harrowing of Hell” in which Jesus unlocked the gates of the Netherworld and lead the just into the gates of our Heavenly Homeland.  Hell was unlocked and emptied.  This army of one led a charge to bring down the gates of death.

His Father crowned him with the crown of his father David, making him a true King of the Jews.

He had taught right worship and right practice all his life, and we spend our lives uncovering his words.

He does ride the winds and urges us to rely on the Spirit of God—the rush of Love—in all that we do.

He is the physical manifestation of “amazing”, and we spend our lives watching amazing things happen in our lives…granting that we pray to God to show us His awesome power.

Not in the way we had expected.  But in a way that we will never forget.

It is a silly thing to expect God to manifest himself to us in ways we would expect.  I mean, ours is a God of joy.  Ours is a God who loves seeing the looks on our surprised faces.  What do you expect?