As the number of disciples continued to grow, the Hellenists complained against the Hebrews because their widows were being neglected in the daily distribution. So the Twelve called together the community of the disciples and said, “It is not right for us to neglect the word of God to serve at table. Brothers, select from among you seven reputable men, filled with the Spirit and wisdom, whom we shall appoint to this task, whereas we shall devote ourselves to prayer and to the ministry of the word.” They presented these men to the apostles who prayed and laid hands on them. The word of God continued to spread, and the number of the disciples in Jerusalem increased greatly; even a large group of priests were becoming obedient to the faith. (Acts 6:1-7)

In today’s First Reading, we hear about the ordination of seven men to serve the early Church as “deacons.” In the face of growing factions and the neglect of those on the margins of the early church community, it became clear that there was a need for a diversity of service. And so the order of deacons was established. As its role developed, two main areas of diaconal service emerged: (1) Ministry of Charity and (2) Ministry of Worship. First, the deacon is ordained to be a witness to the Gospel through a life of service. A deacon serves through his person-to-person encounters: he ministers to the poor, the aged, the sick, prisoners. Second, the deacon assists at the Eucharistic Celebration, administers baptisms, witnesses marriages, officiates at wakes and funerals, administers some sacramentals, and presides at prayer services, i.e., communion services and benediction. The deacon has the flexibility to dedicate his special talents under the guidance of the Holy Spirit and through the Church, to contribute to the mission of the Church within his own community.

Here at St. Dominic’s we are fortunate to have the ministry of Deacons Mike Curran (who, though “retired,” still finds his way to serve at 7:30 a.m. Mass on Sunday!), Dan Rosen and Chuck McNeil. Moreover, we have two deacons in formation, Jimmy Salcido and Dino Ornido, who will be ordained in 2017. Over the next two weeks, we will hear what they have to say about this ministry. This week we will hear from Dan and Chuck, next week from Mike, Jimmy and Dino. Enjoy! ~Fr. Michael Hurley, O.P.

Deacon Dan Rosen: “I will celebrate my 24th year as a Deacon in June. I became involved at St Dominic’s through Deacon Mike and the Lima Center after I retired from full-time work. I had been involved in working with those who are homeless for more than ten years through the St. Vincent DePaul Society and continue working at the Lima Center. The Art of Dying ministry was just beginning when I arrived and I was intrigued by it. Fr. Emmanuel invited me to help get Art of Dying ministers trained, and we are ready to begin visiting sick and homebound parishioners. I love being a deacon and being with people at important moments in their life journey, especially at baptisms of children, at weddings and at funerals. I also enjoy the challenge of preaching in a way that helps people make sense of God’s presence in their lives.” 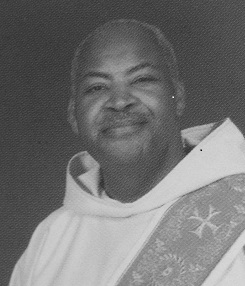 Deacon Chuck McNeil: “I was ordained a permanent Deacon in June, 1999, by Archbishop, now Cardinal, Levada. After my first assignment at Sacred Heart Church, where I was involved in outreach to a residential housing program for people living with AIDS, I was assigned to St. Dominic’s in 2001. St. Dominic’s for me is a place of prayer. I have a great love for the way the Dominican brothers pray and sing the liturgy of the hours.  I am always drawn into prayer by being in the church or participating in the liturgy. Shortly after coming to St. Dominic’s, I organized a team of parishioners who administer to inmates at the county jail. Recruiting, training, and supervising people who had never been in a jail was an amazing experience for me! To see how they have developed their pastoral skills and to share their passionate love for Jesus and for the church is inspiring. Several years ago, after my mother’s death, I began to facilitate the grief support group. Before my mother died, I never knew how important it was for people to have support after death. I’ve seen people who felt that they were hopeless, that they just couldn’t go on. But after seeing people months and years later, healed and supported by each other, truly gives me hope in my own life. This hope is confidence both that healing is possible and assurance that Jesus walks beside us. Being a Deacon has allowed me to minister in the name of the church and to be with people in many different situations. As a deacon I am invited into moments of death, joy, pain, success, suffering and scandal. One thing that the Bishop said to me when I was ordained and he gave me the Book of the Gospel was, “receive the Gospel of Christ whose preacher you now are; teach what you believe and practice what you teach.” These words “practice what you teach” still haunt me. I am inspired by the Dominican motto, “to preach, to praise and to bless.” I have learned from the Dominicans that preaching is more than just standing up in the pulpit: It’s the way you live, the way you pray and the way you listen.”