In mid-May, the Young Adults had their annual retreat at the beautiful Camp Saint Joseph in the Russian River Valley.  I had asked one of the members of the YAG Leadership Team to ask retreatants to share their experiences.  As June rolls on, we will hear from four of our retreat guests.

Barreling across the Golden Gate Bridge, I shared in the collective hope of a group of people who yearned to learn to love themselves. I shared also in the weight of guilt and regret and sin and worry. In short, the topic of the retreat appealed to me. 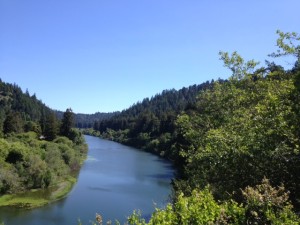 For me, the weekend was truly enlivening. In some sense, I can’t untangle the solace and inspiration I felt from the names of the people I spent time with: my recent conversion to Catholicism was affirmed by Ashley’s enthusiasm, my fear about relationships was healed by the visible love between Bill and Nicole, my anxiety was diminished by Christian’s empathy, my joy revealed again and again by Tessa, Katy, Dan, Martin, and Chinelo, and my faith was fortified by time spent alone in prayer.

Before the retreat, I felt that my mind had become overgrown with trees of despair and doubt, and my only comfort was that perhaps no one would find me lost in that forest. As the weekend began, the retreat started opened my eyes, but all I saw was men as trees, walking. By the end of the retreat, as I careened back down the mountain toward my home, I was relieved to have found that the light of love lives in the men and women of St. Dominic’s. To learn to love myself, I needed only to see the love that a group of near strangers offered to me. For your love and encouragement, I am extremely grateful.