Now, you would think that an event entitled “Coffeehouse” involves…coffee.  (Insight #1.)  Being the coffee-fanatic that I have been called, I thought that there would be a nice cappuccino machine, a few baristas, someone with a really creepy French accent (I oftentimes associate coffee with the French…not exactly sure why)…but no.  When I entered the hall, I saw a lot of really big tables and a stage.

Of course, I’m lying to you.  I knew that Coffeehouse is closer to America’s Got Talent than My Dinner with Andre.   But it makes a relative newcomer like myself ask why things are named the things they are. 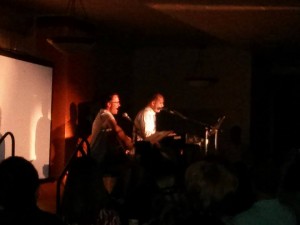 Paul and Andy in the final act of the night.

Anyway, on August 15th and 16th, the Young Adults Group hosted the 24th Annual Coffeehouse.  Tim on guitar and Tessa with a heartbreaking percussion performance, David with the St Dominic’s update—Long Live Father Neo and the Literal-Hole-In-The-Wall!—complete with insisting on the Cal/Stanford rivalry (yawn).  The amazing Keith singing about a beautiful world.  The unpredictable Matt…did his nephew really say that?  Father Emmanuel leading the crowds with Safe and Sound.  A duo from the Contemporary Choir—Paul and Andy—wowed the crowds, both nights demanding a number of encores.  Personally, I think they got off stage on the high chord, ending with Happy.

I had read from Wandering in the Moonlight.  Two different passages for two different nights.  It went okay, I guess.  Consequently, it is funny what people hear and do not hear.  Three times, on both nights, people had asked if they can get a free copy of the book. (1) It’s not published yet and (2) proceeds go to help the elderly friars and the house in general, so the answer is no. 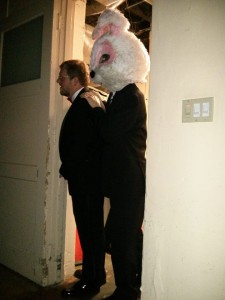 Anyway, there were so many highlights of the night.  The performances.  The drawings by Michael.  The flawless production work by Luisa, Henry, Jerick and all of the background. The marvelous food by Bobbycookies (I am convinced that these guys have not slept since the Chargers won the Superbowl).  Waldo, the bunny head, the cumbersome bund, the surgeon general’s announcement that no cats were harmed in the making of Coffeehouse (which is a lie).

However…by far, the one highlight that I would like the entire world to appreciate is the great and wonderful Father Felix.  I don’t know how in the world Father Emmanuel convinced the man to do it, but he shocked us all by playing ragtime piano on the keys.

There are people that used their smart phones to tape this piece of history.  Naturally.  I mean, who wouldn’t want to see Father Felix joyfully play the ivory?  However, as shy as Father Felix is, it was suggested that I not provide you with that link.  You would have to find that for yourselves.

Thanks be to God for that moment, though.  For those of us privileged to be there on Saturday Night, heaven and earth kissed and we saw a youthful old man.  I wondered if this is what life felt like 60 years ago when Father Felix was still a youngster on the Merchant Marines.  Perhaps.  Just perhaps.