To my dearest and gentle, loving and compassionate readers.  You often ask me to write about what it is like during a day in the life of an ordinary urban priest.  I’m sorry to disappoint you, but there is no such thing as an ordinary day, especially in a parish like St. Dominic’s.  Every day is an adventure. 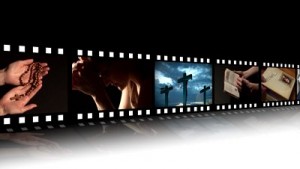 The amazing thing about priesthood is that a priest’s life is a highlight reel.  A priest is invited to be present during seminal moments in a person’s life—his or her birth, major life-changing moments, car accidents, times in the hospital, even death—are all part of a normal day for me.  We are men called to live on the breach of life and death.  Our normality is change.  “Oh God, what a life!” Lacordaire once wrote, “and it is yours, O priest of Jesus Christ!”

A couple of Saturdays ago, I had a “four-for”.  A baptism in the morning, a Nuptial Mass that afternoon, and confessions that evening.  Four Sacraments in one day.  Baptism, Eucharist, witnessed a Marriage and Reconciliation.  To end my “four-for” day (just for the heck of it) I performed a dramatic reading at Coffeehouse.

Of the Seven Sacraments, priests have the authority to dispense five: Baptism, Confession, Eucharist, witness a Marriage and Anointing.  Four of five in one day.  Not a bad way to spend a Saturday.  These moments are grace-filled and beautiful, yet are often filled with evidence of human foibles and fumblings, sometimes on the part of people approaching the priest for the sacrament, sometimes on the part of me the priest.  Power and grace, humility and humor.  Here’s how that “four-for” day went: 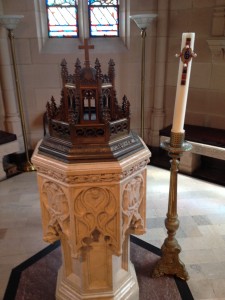 Baptism (Sacrament #1.):  Since our baptism had a smaller party, it took place in the baptistery near the vestibule of the Church. The extended family arrived thirty minutes before the star of the show did.  I was surrounded by grandparents and infants.  The entire time, I was asking for the star of the show.  “She’s not here yet!” was the answer I was given.

The Baptismal Liturgy was normal enough.  Readings from scripture, a homily, the naming and accepting of the child.  Then came time to bless the water and make the formal preparations for baptism.

I love the prayer over the baptismal water.  It is the same prayer that the Presider would use over the water during the Easter Vigil.  This long, involved, intricate prayer recalling the Creation, the Flood, the Red Sea, the Baptism of Jesus, the Great Commission, all reminding us of the elongated and dramatic history of men and women who have been splashed with the same waters that we have been.  In the latter part of the prayer, the Presider is instructed to touch his hand the water.
Now, I had the interesting thought of dipping my hand a few times, making the water splash a little bit.  For dramatic effect, and to keep the kids’ attention, you know.  I thought it would have added. You know.  Stuff.

Then I knocked over the plug. 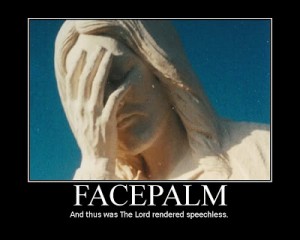 Within seconds, the font was drier than a field of bones.

I must have had an entertaining look on my face, because the family is still laughing outside my office door. The baby is pointing at me.
Anyway, what do you do?  Well, the only a person can do is refill the font and them bless the new water.

Past that, it was a rather normal morning.

Nuptial Mass (Sacrament #2 & #3).  I mean, what can you say about weddings?  The clothing, the music, the energy, the joy and frivolity.

This Nuptial Mass went really well.  This was one of my first couples I had met when I had arrived last September.  I wanted the best possible moment for them.  I’m kinda testy when it comes to weddings.  I so desperately want the moment to go so well for my couple. I think we all do.  Liturgy is amazing here, but for my couples, I don’t want amazing, I want unforgettable.

I remember looking at the groom.  It was ten minutes before we line up to meet the bridesmaids in the procession.  The groom looked ready, but there was something in his eyes.  Nerves?  Maybe.  Worry?  Perhaps. Certainly, we forget that these are heavy moments, overflowing emotion and stress.

His popped his head up and looked into my eyes.  Yes was all over his face. The groom gathered his men, his brothers, around a circle.  A videographer busted into the sacristy and grimaced the moment he saw me place my hand on the groom’s shoulder.

I forget what I prayed for exactly.  I know I recalled that this was a day long in coming.  A day in which he and his fiancé had been waiting.  But did I know that he needed a prayer?  That all of my training as a priest and my four years of practicing the art of priesthood just taught me to do this before every Nuptial Mass?

The fact is, this is only the second time I had asked the men to pray with me before a Nuptial Mass.  And the first time wasn’t even my idea.  I blame instinct…actually, better than that, I blame the Spirit of Wisdom.

The Mass was elegant.  I love how a bride enters our Church.  She looked amazing.  The liturgy had a couple of bumps, as most do.  But it was a beautiful moment in these people’s lives, and I am privileged to be part of it.

After Vespers and Confessions (Sacrament #4), I had a curtain call for Coffeehouse.  Because of some things going on with the Young Adults Group, I had decided to change the reading.  I still read from Wandering in the Moonlight.  However, on Friday, I read excerpts from the opening chapter; on Saturday, I read from a very different section, deeper into the plotline.  I think the emotion and energy of that chapter spoke well to the situation of what had happened to this particular young adult, and I hope he accepts it as a tribute to him.  (Yes, I’m being vague—purposely—for the sake of this person’s privacy.)

I didn’t go to bed until the night was middle-aged.  The producers had invited me to a post-production cocktail.  As touching as the invitation was, I had Sunday to think about.  The big ol’ family get together we call the Liturgy of the Eucharist.

Four Sacraments in eight hours.  “O God, what a life!  And it is your, O priest of Jesus Christ!”

Earlier that day, between events, I caught up with Fr. Michael.  When I told him my schedule, he smiled, saying, “You need an anointing for a complete day.”

“Y’know, captain,” I responded, “I was just thinking the same thing.”