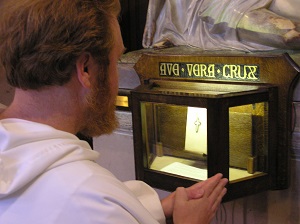 Today we celebrate the Exaltation of the Cross. Historically, this feast commemorates the moment when St. Helena discovered the True Cross on which Christ died. After the death and resurrection of Christ, authorities in Jerusalem made efforts to obscure the Holy Sepulcher, i.e., the site of Jesus’ crucifixion, burial and resurrection. Earth was mounded upon the place, and a pagan temple erected on top of it. When Christianity gained cultural acceptance under Emperor Constantine in 325, his mother, St. Helena traveled to Jerusalem on a quest to find the True Cross. According to tradition, excavation unearthed three crosses grouped together. Assuming that one was the True Cross and the other two belonged to the thieves crucified alongside Christ, an experiment was devised to determine authenticity. In one version of the story, the three crosses were taken to a woman who was near death; when she touched the True Cross, she was healed. In celebration of this discovery of the Holy Cross, Constantine build the Basilica of the Holy Sepulcher, a place in which I had the great privilege to celebrate Mass two weeks after my ordination in 2007!

The legacy of the True Cross continues today. Through generous benefaction, we have a sliver of a fragment in our own St. Dominic’s. Displayed under glass at the foot of the Pieta statue in the south transept, this relic is a treasured place of prayer that has brought consolation to those who are weighed down by the crosses of their lives. The well-worn kneeler, which was recently refurbished, stands as a testament to the intercessory power of the True Cross. 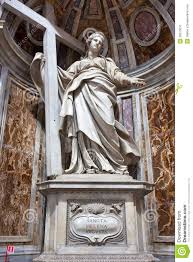 Though the cross is a familiar symbol of our faith, to the earliest Christians it was a sign of shame and death. The Romans used crucifixion as the most cruel and humiliating way of exacting the death penalty. For the contemporaries of Christ, the cross would be akin to the electric chair or the noose of our present age. To exult in the Cross would be unthinkable for those who witnessed it firsthand. And yet, in the light of the Resurrection, the power and significance of the Cross is illumined. Our second reading from St. Paul’s letter to the Philippians reveals that the power of the cross flows from Christ’s loving gift of self, Christ emptied himself, taking the form of a slave, coming in human likeness; and found human in appearance, he humbled himself, becoming obedient to death, even death on a cross. The True Cross reminds us of Christ’s love and the sacrifice he made for us. The Gospel famously echoes the nature of His sacrifice on the cross, For God so loved the world that he gave his only Son, so that everyone who believes in him might not perish but might have eternal life. For God did not send his Son into the world to condemn the world, but that the world might be saved through him. This is the paradox of the cross. Jesus chose to enter into the darkest, most shameful place of humanit,y in order to redeem it. Through the cross, love conquers death.

We all carry crosses of burden. In fact, we can spend an inordinate amount of energy avoiding and complaining about the trials of daily sufferings. The Exaltation of the Cross invites us to consider that it is precisely through the bearing of our crosses faithfully that God’s love comes to life in us. The traditional practice of “offering up” our suffering as a token of our love for God connects us with the paradoxical but powerful sign of the cross. Just as the cross was transformed from a sign of shame and death into the symbol of God’s love, so too, our burdens and suffering can be the very means by which we experience God’s grace in our lives. This week, I invite you to bring your own burdens and crosses to the foot of the True Cross, that you might discover the comfort and consolation of God’s love.