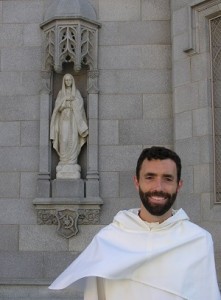 Hello. My name is Br. Andy Opsahl, and I am a student brother who has been in Dominican formation for the past three years. Given that I am assigned to St. Dominic’s Parish for a year of fulltime ministry as part of my discernment of a vocation to the Catholic priesthood, Fr. Michael Hurley asked me to introduce myself. I am 34 years old, grew up in the Sacramento region, and was raised in a devoutly Catholic family of five with two younger sisters. I began sensing a call to the priesthood when I was a sophomore in high school, which, frankly, was disconcerting. At the time, I basically viewed God the way I viewed vegetables in a meal. I recognized the health benefits of vegetables, and I wanted them, like I wanted God, on my plate. But as far as my life was concerned, I desired something fattier – more worldly – to be the main course. After earning a B.A. in journalism, I got a job as a reporter with Government Technology magazine based in Sacramento. It was an enjoyable career, but as thoughts of becoming a priest continued to confront me over the years, and as my faith gradually became the center of my life, finally, I was ready to embrace my desire to become a priest. I am happy to report that has not changed. 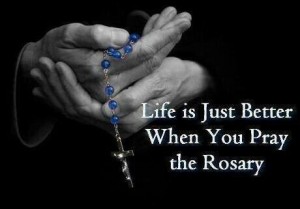 At St. Dominic’s I will prepare engaged couples for marriage, teach in the Children’s Liturgy program, and deliver talks to various groups in the parish. Today being Rosary Sunday, an occasion when our novices take up a second collection to support young Dominican friars in formation, the day brings back memories for me of when I was a novice performing that task. It was a humbling time in my life. Just a few months prior I had been a magazine journalist traveling to places like Manhattan and the White House. As a novice, I had become a guy who needed permission to travel to Walgreens. Dominican religious formation is not only about putting young men through graduate-level philosophical and theological training. It is a process of helping us die to ourselves through the Evangelical Counsels of poverty, chastity, and obedience, which the Gospels teach are paths to Christian perfection. They are to frame a Dominican’s vowed life, and, as indicated earlier, the life is quite a change for an incoming layman. For example, after entering formation, I wore a religious habit, and, as part of religious poverty, it was no longer appropriate to be concerned with trendy clothes, slick-looking cars, and other elements of material fashion, at least as possessions for myself. Regarding chastity, I felt and continue to feel confident about that vow. However, there still are moments I feel a little stunned when contemplating what a profound sacrifice it will be. For Dominican friars, the vows of poverty and chastity are subsumed under obedience, which is the single vow a Dominican takes. Obedience truly can be an interior battle because it is often veryhumbling, which I discovered as a novice. What I found later, however, was that these Evangelical Counsels made it easier to embrace, with an undivided heart, a life of penance, prayer, and contemplation for the sake of preaching Christ to the world. This is the ultimate purpose of Dominican formation.

My journey has not been without stumbles. I am nowhere near Christian perfection. But, due to the process of religious formation, I am increasingly confident that I will be able to give my life to the Church permanently as a Dominican priest, and that it will be a happy life. Thank you for your generosity on Rosary Sunday, because it is gifts from people like you that enable me to be formed in this way. I promise to do my best to honor your generosity, and I look forward to spending this year with you here at St. Dominic’s Parish.