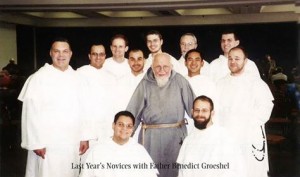 Happy Feast of the Holy Rosary!

I have a quick story to tell. When my class were novices in 2002, we met Fr. Benedict Groeschel, CFR.

He was here for a pair of talks, at the Cathedral and at the Shrine of St. Francis (now reopened).

Fr. Benedict was my first Catholic celebrity that I had ever met.  I remember the ten of us bunched around him after Evening Prayer, two of the more bookish brothers shaking his hand (and his arm) and giving him accolades.  Fr Gregory, who effectively convinced him to stay at the house, was all smiles at his little achievement.

When he spoke at the Cathedral, he was given thirty minutes to talk about Catholic education in the United States.  There were a few hundred in the room.  For fifteen minutes he praised the hospitality of the Dominicans.  The novices, he said, were young, zealous and vivacious, worthy of the mission of Dominic.

Frankly, it was embarrassing.  He was there to raise funds for Catholic education.  Instead, we got Fr. Benedict giving a vocations commercial in front of a bunch of teachers.

Within minutes after Fr. Benedict’s talk at the Cathedral, he was whisked into a car and sent to SFO for a flight back to NYC.

I remember one thing above all.  When I was told how old he was, I thought that we were going to host a curmudgeon. This crackly old guy with a stiff walk and a cane.  A man who is peddling along with nothing to say.  Hey—I was a novice…not exactly my most glorious moment.

I could have been more wrong.  But not by much.

Sure, the guy slowed down.  But you could tell that he was faster than lightening.  He was quick to pay attention, and often laughed with a raspy smile that made the meal table lighter, fuller, and more joyful.  He did have (what I now recognize) that trademark simplicity of the Francis’ little brothers.  Simple. Humble.  Joyful.  Zealously in love with Jesus.  Wicked Smart.  Always with a smile and a word of encouragement.

I could have been more wrong.  But not by much.

The man made me look at why I had entered in the first place.  Should I be a CFR instead of an OP?  Why am I following in Dominic’s footsteps?  What do I want to be?  Why am I here?

It forced me to look at what I wanted to be by the time I die.  What will people say about me?

Can I be zealously in love with God?  Can I serve his Church with fervent urgency?  Will I be loving, funny, always praising and thanking God?  Or will I be young, stupid and judgmental?

Fr. Benedict, thank you for making me look at what I want to be.

Goodbye, faithful servant of the Poor One of God.

Fr. Benedict, may your sons and daughters be inspired by your zeal, love and life.

Jesus, see this good man into your house.

Perhaps, I’ll see him again one day.  One can only hope.

Holy Father Francis, pray for us!