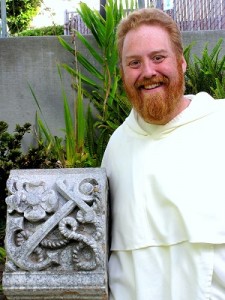 Last Monday, I enjoyed the culmination of Fleet Week with a tour of the USS America. Freshly commissioned on Saturday, the boat was abuzz with folks viewing the inner workings and cutting-edge technology of the newest addition to the fleet. Three aspects of the tour were memorable and parallel the Scripture readings we hear this weekend.

First, because the ship is on active duty and was set to depart, members of the crew along with their family and friends mingled among the tourists. Chatting with one of the crew who welcomed us amidships, it became clear to me that she was there not because she had chosen the assignment, but rather, she was chosen for duty based on her training and expertise. Her knowledge of the hybrid electric-propulsion systems that power the boat made her a logical choice for the assignment. In Thessalonians, St. Paul reminds us that we have been chosen by God to live the faith we profess. “We give thanks to God always for all of you, unceasingly calling to mind your work of faith and labor of love and endurance in hope, knowing how you were chosen.” We often imagine that our faith is simply a matter of our choosing and our faith journey is simply a matter of will. Yet, St. Paul makes it clear that, even before we choose to follow Christ, he has already called us. Like the young crew assigned to the USS America, our following Christ is a response to his initiative. 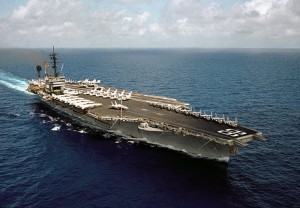 Second, as I entered the first deck, I was greeted by a large pictorial panel of officers who have charge of the ship. What struck me was the number of personnel who support the specific military functions. For example, there is a medical officer looking after the health of the crew, a chaplain who has care for souls, officers in charge of supplies, and various ancillary staff. At full compliment, the crew totals more than 3,000 officers, sailors and marines. The USS America is like a floating city. In the first reading, when God surprisingly chooses King Cyrus of Persia as a Messiah, he gives him the power to free the chosen people from the Babylonia Captivity. “Thus says the LORD to his anointed, Cyrus, whose right hand I grasp, I have called you by your name, giving you a title, though you knew me not. I am the LORD and there is no other, there is no God besides me.” In calling Cyrus “his anointed” or “his Christ,” God makes it clear that those whom He chooses are given the ability to carry out his will. Even though Cyrus is a pagan king without any knowledge of the God of Abraham, God initiates His plan through him. Here the old adage comes to mind, “God doesn’t call the qualified; he qualifies those whom he calls.” Like the crew of the USS America, God has called each of us at St. Dominic’s to carry out a unique and vital mission to bring God’s love into the world. At home, at work, in the marketplace, there is no daily context too trivial where we cannot somehow share the love of God with others. You cannot be God’s love the same way I can, and reciprocally, I cannot share God’s love as you are able. It takes a community to bring God’s love to life. 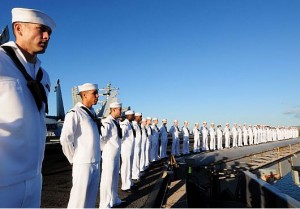 Third, I was interested to see how the crew interacted with each other. As I disembarked, a young sailor who boarded stopped to salute an officer. A tourist asked, “Why did you salute?” She said, “Because he is an officer,” pointing to the insignia on his shoulder. Whether they personally know each other or not, the insignia worn on their uniform reveals the rank and task of each individual. The insignia gives not only a sense of identity to the crew, but helps them to relate to one other for the good working of the entire boat. In the Gospel, Jesus gives the famous answer to those who ask whether or not one ought to pay tax. “Give to Caesar what belongs to Caesar and to God what belongs to God.” Because Caesar’s image is on the coin of the realm, he has a claim on it. Similarly, because we are made in the image and likeness of God, Christ answers that God has a claim on our very lives. Every goodness in our life comes from God, and our task is to return that goodness through the way we live and treat others.

The USS America has launched its first mission to protect and serve. Here at St. Dominic’s, we launch a weekend of discernment of how we can give to God what is God’s: our minds and hearts. One practical way to give God your talents is to pick up our new ministry booklet published this weekend. In the booklet, you’ll discover a myriad of ways that you can help to make a difference in the life of the parish and community. The act of considering how we give to God what is God’s activates our faith and brings God’s love to life.