Home→Our Pastor's Corner→Our Pastor’s Corner: Feast of the Dedication of the Lateran Basilica in Rome 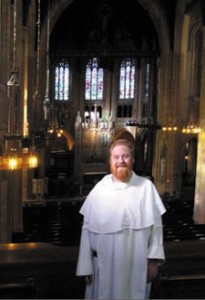 Since the Passover of the Jews was near, Jesus went up to Jerusalem.  He found in the temple area those who sold oxen, sheep, and doves, as well as the money-changers seated there.  He made a whip out of cords and drove them all out of the temple area, with the sheep and oxen, and spilled the coins of the money-changers and overturned their tables, and to those who sold doves he said, “Take these out of here, and stop making my Father’s house a marketplace.”  His disciples recalled the words of Scripture: Zeal for your house will consume me. (Jn. 2:13-18)

From the dawn of time, man has built altars for sacrifice.  From ancient pagans to the Jewish patriarchs, erecting sacred structures on high places reveals the natural instinct to worship.  Today we celebrate the Feast of the Basilica of St. John Lateran in Rome.  While many think of St. Peter’s as the Pope’s main church, St. John Lateran is in fact the cathedral of the Diocese of Rome.  Receiving a land from the wealthy Lateran family in the fourth century, Emperor Constantine built the original Basilica as a grand edifice worthy of worship. Through the years, St. John’s was torched by fire, shaken by earthquakes and battered by the ravages of war, and yet, it remains as the Pope’s cathedral.  The present Church was reconstructed in 1646, and since I have not had the opportunity to visit, I decided to take a virtual tour.  The Lateran’s towering facade is crowned with 15 colossal statues of Christ, John the Baptist, John the Evangelist and 12 doctors of the Church. Beneath its high altar rest the remains of the small wooden table on which tradition holds St. Peter himself celebrated Mass.  My virtual tour awakened a desire to visit in person someday!

In this weekend’s Gospel, Jesus reinforces the importance of places for worship.  Flashing anger, Jesus casts out the money changers from the Temple, declaring it to be his “Father’s house.”  Here Jesus reveals that the reason we celebrated feasts for church’s such as the Basilica of St. John’s is not simply because they are beautiful buildings of historic value, but precisely because they are places of worship where, united with Christ, we connect with our Father. 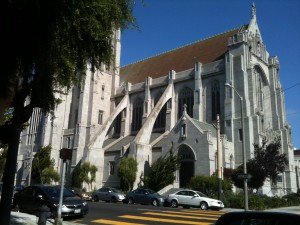 One of the joys of bring pastor here at St. Dominic’s is the privilege of celebrating Mass daily either in the intimacy of the Lady Chapel or at the main altar in all of its grandeur.  Though I admit a bit of bias, I consider St. Dominic’s to be one of the most beautiful Churches in the City.  I am grateful that we have been gifted with such a precious treasure.  Like the Lateran, St. Dominic’s has its own storied history.   In 1873, the first St. Dominic’s Church was a wooden structure built by shipbuilders who constructed it entirely without nails! Quickly outgrowing this space, a second church was built in 1883.  Destroyed in the earthquake and fires of 1906, construction of the present Church commenced in 1923 and was completely in 1928.  More recently, after the 1989 Loma Prieta earthquake, the Church was damaged and was in need of structural reinforcement.  Through the efforts of our dear Fr. Martin, efforts to Save God’s House were initiated.  The idea was to construct a “ring of steel” supported by flying buttresses which would encircle and stabilize the Church.  In the following years, these efforts continued and through the vision of Fr. Xavier included the restoration of the stain glass windows and other refurbishments.  Though most of this work is finished, because of insufficient funds at the time, there remains a final piece to complete.  Though steel reinforcements support the nave, apse and sanctuary, it is not connected at the front of the Church around the Christ in Glory window.

As pastor, I consider it to be a priority to finish this work, and so, even though the cost of completing this project has increased, and we still are still in need of funding, construction will commence under the continued direction of Cahill contractors beginning in January.  Though the idea of completing this project is exciting, it will mean some inconvenience as scaffold is erected in the choir loft and the window is boarded up for its protection.  I ask for your patience understanding as we complete this crucial project to preserve our beloved Church.  My hope is for construction to be complete for the celebration of St. Dominic’s Month in August.  As we gather to worship this weekend, we give thanks to God for the gift of this place where we can come week after week to celebrate God’s blessings and presence in our lives.