Home→A Preachers Life→There and back again, a Dominican’s Tale (part I)

The Priory has retreat days twice a year, in Fall and Spring.  A beautiful experience, a time when the novices and senior community can be a community, not simply run into each other in the hallway and at dinner.  This Fall, we found ourselves north of Petaluma.

Brothers Daniel and Andy and I carpooled.  When some others left, they had asked us to take some of the supply boxes of food, games and movies for our recreation times. 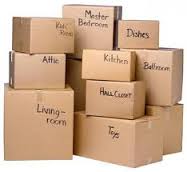 The pile of boxes was larger than a small triceratops.  It took us three seconds to figure out that we needed a van.

You should have seen the look on our faces.  You should have heard what we said.  (Actually, you shouldn’t—it would make the ratings of the blog from “G” to ….not “G”.)  So I called up Fr. Anthony, “Hey, can we take one of the vans up to the retreat place?”

“Um, I don’t see why not,” he said in his saintly voice, “Now remember, it’s an older van, so just be gentle.”

It didn’t take us that long to pack.  I hopped into the driver’s seat, Brother Andy in shotgun and Brother Daniel behind me.  Soon, we drove north and crossed the Golden Gate Bridge.

Brother Andy said, “Okay, so we’re in a new car, this is going to be a great adventure.”

Within moments, Brother Daniel fell asleep in the back seat, while Brother Andy and I spoke about our community life and our ministry at St. Dominic’s.  While on the 101 North, we both heard a POP and Brother Daniel woke up, startled.  I looked into the rear window mirror and saw smoke streaming out of the passenger side of the car.  Cars behind us slowed down.

Brother Daniel suggested, in a very saintly voice, “Move over to the side, Isaiah, there we go.”

Once we had stopped, Brother Andy got out of the car to check out the vehicle.

Meanwhile, Brother Daniel asked, “Do we have Triple ‘A’?”

“They don’t do corporate,” I responded in a not-saintly voice.  “We would have to get individual plans if we wanna go that route…and well, we just didn’t.” 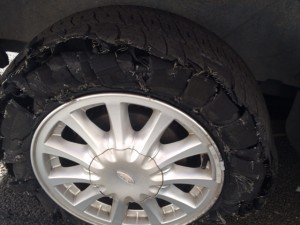 Brother Andy returned with a look on his face.  “Shredded.  The back passenger tire…simply shredded.”  He shook his head.  He looked at me in the eye, and in a saintly voice, asked, “So do we have Triple ‘A’?”

So just imagine three Dominicans (though not in habit) on the 101 North, just south of Cotati, bustling about, trying to change a tire.  Well, actually, the guys were changing the tire; meanwhile, I’m texting the rest of the community of our “minor snag.”

As the brothers got the donut out of its space, a CHP Officer shows up in his motorcycle.  “Y’guys all right?”

Brother Daniel laughed a saintly laugh.  “Well, we just got out the spare,” he said, waving the instruction manual.  “We just need to put the thing on.” 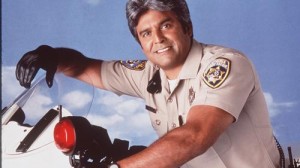 Not our officer…which would have been hilarious.

The Officer nodded with his strong, masculine chin.  “If you can, try to get the spare on as quickly as possible.”

The other brothers proceeded to change the tire.  I looked at the Officer, asking, “Is there anything else we can do in the meantime, sir?”  (Using the word ‘sir’ with a man with a gun seems to be the right thing to do in the middle of the highway.)

Despite that he had on aviator sunglasses, I could tell that he were weighing options in his mind.  He turned to me and asked, “”Do they know what they are doing?”

I grinned a not-saintly grin.  “You’re dealing with a brother, a seminarian, and a priest.  We’re a bad joke you tell at a bar.”

The strong masculine officer shook his head ever so slightly, getting off his bike.  He proceeded to the van and asked for the jack.  He said, “You three.  Over there.  Give me more light.”

And so he proceeded to change the tire for us.

To protect and serve.

“I can navigate the jungles of Guatamala and El Salvador, I’ve lead countless formation programs and retreats…and I can’t even change a tire,” I commiserated.  “Did I mention that my father was an engineer?” No, it was not a saintly voice.

A saintly friend texted me the address to the closest Costco, so after the Officer changed our tire, he dismissed us.  God bless him and his family.

Taking off at thirty miles an hour, we got off the highway as quickly as we could.  The officer was just behind us.  “I’m sure he is making sure we actually get off the road safely,” one of the saintly brothers mentioned.  Soon, the officer passed us and proceeded to pull over a car for running a red light.

“I’m sure he is happy to get some real cop work done,” another mentioned. 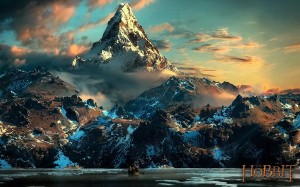 Our unintended Costco trip was quick enough.  All things counting, an hour at Costco for a changed pair of tires?  Not bad.

But lo…our trip into the Lonely Mountain north of Petaluma still loomed dark as black in front of us.  And Brother Sun was shying into sleep.

We blog onto next week for part two.