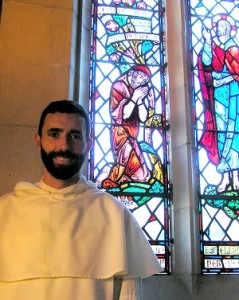 Hello. My name is Brother Andy Opsahl, and I am a Dominican student brother doing an internship here at St. Dominic’s until June. Father Michael Hurley will be absent for the next three weeks due to his leadership role on the Provincial Council at the current Chapter being held by the Western Dominican Province. A chapter is an event where major decisions are made for our order. Father Michael has asked me to fill in for him in the Pastor’s Corner during that time.

This weekend we celebrate the Baptism of our Lord Jesus Christ by John in the River Jordan. It was the kickoff event for Christ’s public ministry. Through His public ministry, Jesus marked the path by which all Christians are to follow Him. That path begins for us, as it did for Christ’s ministry, with baptism. Baptism should be the foundational context for everything we do. Christ’s baptism pointed toward His death and Resurrection. Through baptism we are incorporated into that death and Resurrection, which leads us out of the corruption of this life and into the perfection of the next. Being baptized into Christ’s death and Resurrection transforms us into extensions of Him, which enables us to share in both His human and divine natures. It is a process that is initiated in baptism and reaches its fulfillment outside of time after our physical deaths.

Meanwhile, those of us who remain here in the realm of time where the flesh can still lust against the Spirit are left to work out our salvation with fear and trembling. Saint Paul describes this as a time of groaning inwardly as we await the redemption of our bodies that will bring the rebirth initiated by baptism to fulfillment. As stated earlier, baptism should be the foundational context for everything we do in this life. The difficulty for us is that it is easy to lose our sense of that foundational context. How do we lose it? For me, it starts when I drift out of the habit of reflecting on the fundamental precepts of what I believe as a baptized Christian. Gradually, usually without my even noticing it, the fleeting concerns of this life begin to dominate. Increasingly my actions become driven by desires for things that dazzle my eyes, indulge my belly, or delight my ego.

The last of those three is by far the most prominent, which should not surprise me, given that ego issues are related to pride, which was at the heart of the first human sin. Before that happened, at the beginning of human history, human beings did everything with an eye genuinely aimed at placing God’s will above their own, glorifying God over themselves. They cut themselves off from that perfect union with God by preferring to obey themselves, who were part of worldly creation, rather than obeying God who created them.

Thus began humanity’s tendency to be dominated by worldly distractions from God as the foundational context for everything human beings did. We no longer lived in the perfection of what we had been created to be on this earth. That perfection had been corrupted, and that corruption led to human pain, lust, toil, and ultimately death. We had committed an offense against our Creator of infinite proportions. That offense incurred an infinite penalty that humanity, with its finite, corrupted nature, was incapable of paying on its own. Accordingly, Christ took on our fallen nature and transformed it with His into something that could indeed pay an infinite penalty. Christian baptism became the passageway into that transformation for every person who professes faith in Jesus Christ as the Son of God. That eternal union with God that is initiated by our baptism is the ultimate aim of Christian existence in the present, temporary life.

During the times you find you have lost your sense of direction or have become driven by fleeting worldly concerns, recall your baptism and reflect on the fundamental precepts it signifies. Then, ask yourself, “Do I literally believe that?” If the answer to that question is “yes,” thank God. You have what should be the foundation for whatever you do next.