Happy Our Lady of Lourdes, everyone! 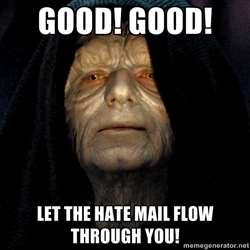 A few weeks back, I got some hate mail.  You know what I’m talking about.  An anonymous email from a made-up email address from someone who tried to character assassinate me.  Sigh.  I mean, this is one of the dangers of developing a blog and the social media for the parish, right?  There will always be a critic or a troll.  It’s goes with the territory, and I knowingly took it on.

Now, it would be little of me if I ranted on what the note was about.  But suffice it to say that most of the comments were rude, unfounded, and sadly comical.  There were a couple of comments that told me that I was part of the Evil Empire because I was affiliated with Stanford University.  (Unnecessary tangent: this is why I rarely reference my previous assignment—people automatically rip me if I mention it, sigh…makes me wonder how Fr. Xavier is holding up….)  And there were others that told me how inept I was as a priest and preacher.  Sigh.

Now, as I had alluded to, this email was delivered a few weeks back, which means I had time to pray and think over (and delete) this note. 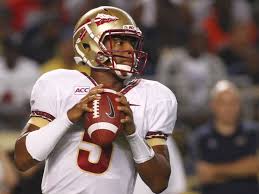 Confession:  I love trolling on Jameis Winston, the former quarterback for the Florida State University Seminoles football team.  Undoubtedly a talented player, his off-the-field antics are the things that would make Bill Clinton blush.  You don’t have to Google him for that long to figure how much of a ‘bad boy’ this guy is.  And when I would talk to others who are into the college football scene, I would happily bring up this guy’s past, and trash his reputation.  And you know what?  It was fun.

It’s not exactly fun anymore, and this is why:

Once, I was out, and I made a crack comment about Winston.  One of the people I were talking to laughed, but later on, said, “Iz—that guy is a son.”

It’s easy to trash someone if you don’t have a relationship with him.  It’s easy for us to trash any celebrity, football player, clergyman, if you don’t know anything other than their first and last name.  It’s easy for me to trash Winston because I hear reports from ESPN and Bleacher Report, and listen to podcasts of what other people say about the guy. Yet, I have never had a conversation with the guy.  And I will even less likely even meet him…ever.

I have no idea who this guy is, other than that he is a college student, an athlete, and is characterized as unwise and unpredictable.

In other words, I have no idea who is this guy is at all. 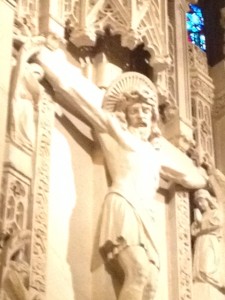 Yes, I don’t know much about this guy.  But what I was reminded of is extremely important.  That Jamies Winston has a mother and a father.  He is someone’s son.  He most likely wants to be a father some day.  And he as dreams and aspirations like I do.  He has faults like I do.  He has made mistakes (albeit publically) like I have.

I will respect and read any and all constructive criticism that I receive about any social media of the parish and of my overall ministry at St Dominic’s Catholic Church.  Yet, gentle reader, be mindful of this request: remember that I too am a son.  I too was created by the very same God that created you.  That the very same Jesus that wants you to become a saint wants me to become a saint as well.  So please pray over any and all comments you will make to me, remembering this very fact…then write and send that email.

PS: For the Lenten Season, I have given Brother Andrew the Wise the opportunity to spend this time with you.  See y’all in Easter!