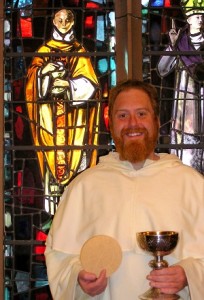 A number of years ago, I was helping to prepare a group of second graders for First Communion. As part of the presentation, I held up an unconsecrated host and asked, “At Mass, who does this become?” With one voice, the class responded “Jesus!” Pleased with their reply, I opened it up for questions, which mainly focused on the practicalities of how to receive communion. After a few minutes, I fielded a final question from a little girl sitting right up front. With a puzzled look on her face, she pointed to the host asked, “If that’s Jesus, how does He fit in there?”

This weekend we celebrate First Communions. The mystery of the Eucharist is at the heart of our faith. As a mystery, the “how” of the Eucharist goes beyond full comprehension. Thankfully, Jesus says, “Take and eat, not take and understand.” So we might not fathom its physics, Christ does reveal the reason for the Eucharist. This revelation occurs at the Last Supper. Knowing that he will soon be separated from his apostles, Jesus transforms the Passover bread into His Body, so that when the apostles are faithful to his command to “do this in memory of me,” the Eucharist will form them together as a living body. Christ’s humility in assuming human nature manifests itself most profoundly at the Last Supper. For on that night, the courage and nerve of most of the apostles and disciples fail. In the face of crisis, they betray, deny and abandon the Lord. They fail to live the Gospel command of love. What is Christ’s response? To become even more humble, to stoop to meet them in their fragility. He becomes as small as a bit of bread, so that, through the Eucharist, they might have the strength to love one another in the face of adversity. In the Eucharist, Jesus becomes small, so that they might become strong. The Passover bread that they share is no longer simply bread, but is the substance of Christ himself which unites them both with Christ and with one another.

In the Eucharist, God not only forms us as a people, but transforms us by his grace. Our Gospel speaks about this transformation, Remain in me, as I remain in you. Just as a branch cannot bear fruit on its own unless it remains on the vine, so neither can you unless you remain in me. I am the vine, you are the branches. Whoever remains in me and I in him will bear much fruit, because without me you can do nothing. (John 15:4-6) The great gift of the Eucharist is the gift of God’s life within us. When we consume Communion, the very life of God transforms us, just as it does the bread. This bread of angels, the panis angelicus, nourishes us with the life of God’s grace, and there is no moment in which we are closer to heaven than the moment we receive the Eucharist. In this moment, our hearts are nourished by heavenly bread. Jesus becomes bread so that we might be fed.

As we rejoice to witness our children receive communion for the very first time, we are invited to once again treasure the gift of the Eucharist. Like the apostles, we struggle to live the command we hear in this week’s Gospel to love another. Jealousy, selfishness, resentment: if we’re honest, we are not stranger to such sins. Through regular communion, we are given the strength of him who became small for our sake, Jesus becomes small, so that we might become strong. Even if we are successful in rooting out some of our more obvious vices, the simple routine of our worship can itself be a pitfall. Especially for us who are in the habit of receiving communion week after week, we have to guard against complacency and indifference. Inspired by Jesus’ words at the Last Supper, we might make his wish our prayer “Remain in me, Lord.” As you receive the Eucharist and return to your pew, join me in praying, “Remain in me, Lord.” As you go about the busyness of the day invite Jesus with the words, “Remain in me, Lord.” As you wake in morning and retire in evening call upon the strength of his presence, “Remain in me, Lord.” And expect Christ to bear the fruit of his love in our lives.