“To what shall we compare the kingdom of God, or what parable can we use for it? It is like a mustard seed that, when it is sown in the ground, is the smallest of all the seeds on the earth. But once it is sown, it springs up and becomes the largest of plants and puts forth large branches, so that the birds of the sky can dwell in its shade.” With many such parables he spoke the word to them as they were able to understand it. Without parables he did not speak to them, but to his own disciples he explained everything in private. (Mark 4:34-40) 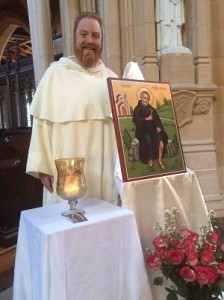 In the wake of the festive trilogy of Pentecost, Trinity and Corpus Christi, we embark into ordinary time with a sense of great blessing. In the Gospel this weekend, Jesus compares the Kingdom of God to a mustard seed. Just as the large mustard tree comes from a diminutive seed, so too, the rich blessings of God’s grace find their origin in small moments, both ordinary and miraculous.

This past week, we concluded the powerful novena to St. Peregrine that was preached by Fr Brian Mullady, O.P. A central theme in Fr Brian’s preaching was the connection between healing and God’s grace. The story of St. Peregrine itself shows how small moments of grace can transform and heal. Born in Forli, Italy, around 1265, St. Peregrine grew up in a family and town that were politically and socially opposed to the Pope. When St. Philip Benizi, Prior General of the Servants of Mary, went to Forli to preach reconciliation, the hot-headed young Peregrine, who was very intense in his political fervor, not only heckled Philip during his preaching, but, in fact, struck him. Philip, instead of responding with anger and violence to the attack, turned and forgave Peregrine. This brief grace-filled encounter with Philip dramatically changed Peregrine. Having a palpable experience of compassion, Peregrine began channeling his own energy into doing corporeal and spiritual works of mercy and eventually he joined the Servants of Mary in Siena, Italy. He returned to Forli, where he spent the rest of his life, dedicating himself to the sick, the poor, and those on the fringes of society. His ministry involved long hours of standing which led to varicose veins. This condition later deteriorated into an open sore on his leg, which was eventually diagnosed as cancer. Peregrine’s leg wound became so serious that the local surgeon decided to amputate the leg. The night before the surgery, Peregrine prayed before the image of the crucified Christ, and when he awoke, the wound was healed and his leg saved. For this reason, St. Peregrine is the Patron Saint of those suffering from cancer.

Though St. Peregrine experienced God’s grace in an extraordinary way, God is also present in the ordinary of our daily lives. In a particular way, we are filled with the life of God whenever we receive the sacraments. The gift of the sacraments can only thrive when people respond to the call to ordained ministry. This month, we celebrate the ordination of several men who have connections to St. Dominic’s. Our own Dominican Fr. Gabriel Mosher celebrated a Mass of Thanksgiving here last Thursday evening according to the traditional Dominican Rite. Having lived here with Fr. Gabriel when he was a novice in my first year of ordination, I rejoice that he has persevered in his call and look forward to many fruitful years of service. Moreover, we give thanks for the ordination of Fr. Marty Silva, SJ, who was involved with our young adults for many years and entered the Society of Jesus. Finally, we are delighted to welcome back the freshly ordained Fr. Timothy Ferguson to our morning Masses this Sunday. Fr. Timothy was on staff here at St. Dominic’s before pursuing a degree in canon law. Subsequently, he discerned the call to serve in the Diocese of Marquette, Michigan, and was ordained by Bishop Doerfler. May the Lord continue to call workers into the field to sow the seeds of his grace and harvest the fruits of his joy!