In the early part of our trip, I asked my host, “If you were to go to Central, where would you go?”

“One thing you’ve got to see is the Peddor Building and go to Abercrombie and Fitch.”

…not exactly what I was expecting.

I mean, I’m insecure enough as it is, the last thing I want to do is be surrounded by models and twenty foot tall closeups of stacked men, looking at me dreamily. 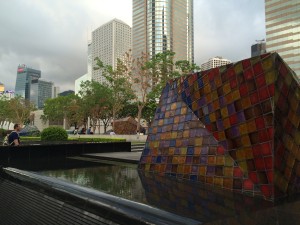 Despite, or because of, myself, we went anyway.  It was really close to where we needed to be dropped off for our appointments.

Now some context: “Central” refers to a part of the Hong Kong Island where everything money is located.  The banks, the malls, the street markets (read: haggle), the midlevel escalators, all things that deal with money are centered on Central.  Yet, the Cathedral and Chancery are also located here, in the middle of everything.

We were dropped off across the street from the Peddor Building, the home of Abercrombie and Fitch. 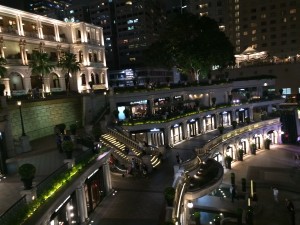 I remember seeing the large ads and kitty-corner to us, a bank with the flags of China, Hong Kong and the Mass Transit Railway flying overhead. Double-decker buses and cars and people and more cars, and more people.  Teslas and Mazaratis and limos, people dressed as though they either just rolled out of bed, or they were rolled out from a Paris fashion boutique.  Half of the people were on the phone or listening to music on their smartphone.  The other half were talking (yelling?) at marketers about the price of things being too high.

The streets were so clean.  Not one chewed up piece of gum on the concrete, not one piece of trash on the street corner.  I hadn’t seen any homeless by then (that was the next evening, outside the MTR).  Rather, I was surrounded by cars and people that needed to get somewhere three hours ago.

own the street and saw a staircase about ten feet away from me, some anglos and Chinese stepping out with large A&F bags. The steps were marble black with gold flakes.  You could simply smell perfume pouring out of the entrance like chocolate from a lava cake.

Inside was dark.  You couldn’t hear the music–you more like felt it.  You could feel the bassline inside your chest.  The thump-thump-thump, the rumble of the crowd, the high toned chatter of the girls, the legato flirty-honey from the lips of the boys.  Spotlights illuminating the outfits on sale.  People unfurling potential prizes, laying sweaters or shirts or shorts against their bodies, looking into the mirrors.  Fake plants, fake smells, fake desires.

Apparently, the Hong Kong branch hires models from English-speaking countries for retail.  Everyone who worked at the store needed to be in magazines.  And they knew it.

Sexy Casual, they call it. 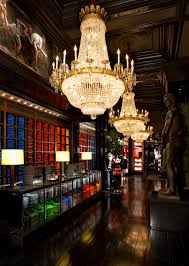 I felt as though I were transported into another world.  A world where beauty is king, and sexy is his worthy bride.  Everything looking beautiful and unattainable, drop-dead gorgeous or heart-breakingly stunning.  You wanted to be part of it.  To feel how these models felt.  To desire what they desire.  To be what they are.

Though you could touch and feel and even try on every article of clothing that they had, you knew that you could never touch their reality. You couldn’t be part of their world.  You knew you never belong to their universe.

And it made you feel pathetic.

Our Solemn Mass (11:30 Sunday) is the nicknamed the “Smells & Bells Mass”. The four part choir with older, if not ancient, music, the candle processions, the incense. 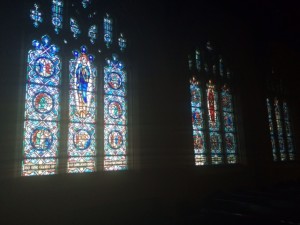 The intent of the incense and the candles and the processions is to bring us to another world.  Catholics think symbolically—these elements of the liturgy all have symbolic value.  Yet, also, these smells and sounds and movements bring us to a deeper, hidden reality.  This time in the high point of the Day of the Risen Son allows us to talk to angels, speak the language of God and sit, rank-in-rank, with the sanctified.

Unlike some store in the middle of the Peddor Building, the Liturgy of the Eucharist transports us—not to a nightclub—but into the realm of the Immutable God.  The smoke we see, the burning incense we smell, the candles we light, the readings we hear, helps the worshipper to kiss heavenly bliss. 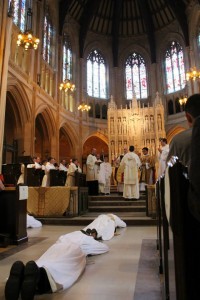 We weren’t at A&F long. But I remember distinctly feeling a little cold and a bit empty coming out of it.  Yes, I was transported to another world, but a world that I wasn’t made for.  I would rather gaze into the deeper reality in which eyes cannot see.