A few weeks back, Fr. Stephen Maria texted me, saying that my classmates will celebrate our ordination anniversary somewhere near Petaluma.  A Mass together, dinner, that sort of thing.  I responded, “Sorry, dude, going on retreat that week.  Have fun and don’t forget to go to confession!” 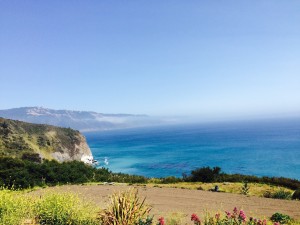 I write this post from Camadoli, high above Big Sur.  There are a series of hermitages and a retreat house nearby.  Thankfully, there is no structure to our retreat time.  We are invited to pray with the monks; you are even invited to go to confession and direction if you would like.  But really, the time is up to you.

Anyhow, I had spoken (quietly—very quietly) with another retreatant. She told me a little about her story, and I a little of mine. I mentioned that it was my ordination anniversary that day. She smiled and congratulated me.  Very soon after, we excused ourselves and departed to our respective rooms.

Before Vespers, we saw each other as we entered the chapel.  She gave me a huge hug, patting me on the back, and congratulated me for my anniversary.  I smiled, thanked her, and we walked into Vespers together.

It’s nice to have a huggy-friend.

Vespers with monks was long, peaceful, yet energetic.  You felt the enthusiasm and love that these men had for their God.  Peaceful, joyful, spirited, they led us into a deeper contemplation to the One Who Calls. 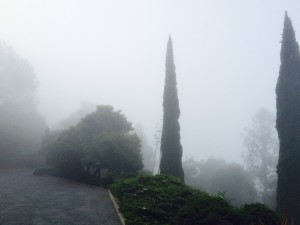 The morning I left from my retreat.

After the closing prayer, the monks (and guests) process to a beautiful icon of Our Lady of Perpetual Help, to the left of the altar.  After the monks, we lined up behind them.  From behind me, I felt two large hands around my biceps.  I turned around and saw an older gentleman, who inclined his head and whispered into my ear.  (The funny thing about Camadoli is that you are asked to keep things very very very quiet; thus, when people whisper to you, you can’t discern a single syllable of what they are saying….) My huggy-friend from before —you know, the one woman who gave me that huge hug outside the chapel—smiled and walked on.  We processed to the Blessed Mother icon and chanted the Salve Regina.

Now, I didn’t think much of it—the man whispering to me, that is.  I thought it strange that the huggy-friend found the other guy so amusing.  In response to his words, I looked down at my habit, presuming that he told me to straighten something out.  I saw that my capuce was on straight; I had adjusted my belt and rosary, making sure that I was looking in proper order.  I moved on, hoping that he were satisfied.

After the Salve procession, there is an optional time for Eucharistic adoration.  As I prepared for adoration, another gentleman came up to me, his arms open wide, a toothless smile on his face.  He responded in kind and he muttered something in my ear.  And AGAIN, because we are told to be very very very quiet, I had no idea what he had said.

…except, this time, he started patting my back.

Meanwhile, a priest-monk held up the monstrance, holding up Christ the High Priest, and processed Him to the Altar.  As though a jolt of lightening had shocked us, the entire sanctuary stood to attention, waiting for the Lord to sit upon His throne.

After the priest-monk placed Jesus on His Altar, this second man looked at me, nodded, and walked to his place.  I gave him a toothless smile and settled in.

I heard a scoff to my right.  Again, my huggy-friend muffled a smile and closed her eyes.

Looking at her, I reached back and found a smooth something attached to my back.  Crinkle.  Crinkle.  Crinkling my hands towards the edge of this thing, I ripped at it, the small noises echoing within the chamber.  Most of the assembly looked up at me, annoyed, amused, indifferent, something.  I looked down and saw a half-sheet sized sign: 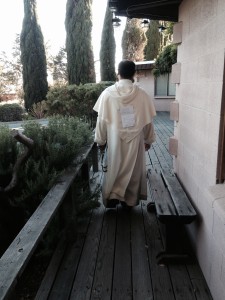 “HUG ME.  It’s the anniversary of my ordination into the priesthood.  Thank you for your prayers and God bless!”

Then I heard a snicker.  Then another.  …and another.

That huggy-friend of mine buried her face in her long, blonde hair and her hands, daring not to look up.  The gentleman who embraced me before the Salve scoffed and looked around, embarrassed by his noise. 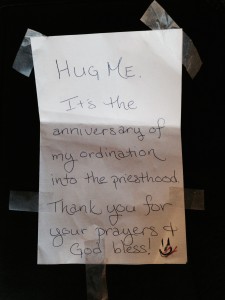 Instead, I felt the warmth and love of God and his People.  Staring at this sign now, I truly feel blessed over these past five years.  Yes, indeed, dark times as well as bright, struggles as well as wonder-filled flights of grace.  Tears and yells, screams, doubts, mistakes, and shocks.  Oh truly, within a matter of weeks, I have seen it all.  Within a matter of five years, I have seen the brightest and darkest moments of a person’s life…which, for me, is just another day.

The life of priesthood is an ongoing highlight reel.  A roller coaster, really, where the next turn is as dramatic as the last, as mundane as the first.  A day where you can anoint one person as they head to surgery, then fifteen minutes later, bring someone back into a right relationship with Jesus, then attend a baptism, then a wedding, or even a funeral.  The next day could be a day where a person comes back to Church after being gone for twenty five, thirty years, or a day filled with men and women saying, “Bless me Father, for I have sinned, it’s been a week since my last confession….”  Or it can be filled with appointments, planning meetings, paperwork and email.  You just never know.  I’m rather sure that parenthood is much the same way.

Whether it be dark or bright times, these five years have been filled to overflowing with grace and light.  In the mundane atmosphere of setting up meetings and taking notes, it’s easy to forget to say “thank you” to God.

Thank you, Jesus Christ, High Priest
for calling such a simpleton to such a life of grace.
May the actions you call me to preside,
the words you have granted me to speak
the ministries in which you have called me
bring your people into the dark brightness of your Passionate Love.