Brothers and Sisters: Be subordinate to one another out of reverence for Christ. Wives should be subordinate to their husbands as to the Lord. As the church is subordinate to Christ, so wives should be subordinate to their husbands in everything. Husbands, love your wives, even as Christ loved the church and handed himself over for her to sanctify her. So also husbands should love their wives as their own bodies. He who loves his wife loves himself. For no one hates his own flesh but rather nourishes and cherishes it, even as Christ does the church, because we are members of his body. For this reason a man shall leave his father and his mother and be joined to his wife, and the two shall become one flesh. (Ephesians 5: 21-32) 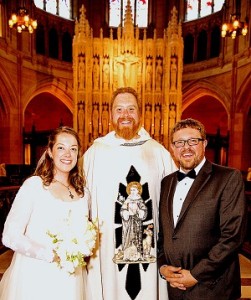 When faced with these words of St. Paul, the preacher’s initial instinct can be to either avoid or omit (by choosing an optional, abbreviated version). When the lector proclaims the verse, “Wives be subordinate to your husbands,” there is often a moment of awkwardness that leads the preacher to page quickly to the Gospel, hoping that Christ’s words will quickly dissipate any discomfort. The general attitude towards this passage is that, at best, even if St. Paul himself is not sexist, he is expressing a cultural misogyny which was normative of his time.

The first time I encountered this Gospel as preacher, this was my general reaction. So I was surprised when circumstances forced me to engage this reading and discover the power and beauty of St. Paul’s words. In the course of preparing a couple for marriage, I asked them to choose their Mass Scripture readings that best expressed the meaning of their wedding vows. Because Scripture is filled with spousal imagery and rich love language in both the Old and New Testaments, discussing their choices helps both to encourage the couple to think about the virtue and values of their relationship and to personalize the homily. So when the couple chose this passage from Ephesians, I thought that they were joking. “You really want the words “wives be subordinate to your husbands” to ring out on your wedding day…or maybe you want me to wear a flak jacket at the ambo to avoid any projectiles of opprobrium.” But they were serious. Not only did they want this passage to be read, they wanted me to make it the central focus of the homily and the “theme” of the Mass. So I naturally asked them what this passage meant to them and why they felt so strongly about having it shape their wedding readings. Their response made me appreciate this passage and see it from a fresh perspective.

This is what they told me: Love is the gift of self. In saying, “I do” to one another, they wanted to entrust themselves to each other completely. Their sorrow and joys, hopes and dreams, the destiny of their lives were now intrinsically and intimately entwined together. So when St. Paul says, “Wives be subordinate to your husbands,” this is merely one side his general challenge to, “Be subordinate to one another.” This is why St Paul continues, “Husbands, love your wives, even as Christ loved the church and handed himself over for her to sanctify her. So also husbands should love their wives as their own bodies.” As the couple explained, love can only exist when we make ourselves utterly vulnerable to the other person. They did not see their relationship as a means of self fulfillment or a way to meet their needs, but an intimate commitment whereby they could mutually “subordinate” their own desires for the sake of the other. In other words, real love is sacrificial. It imitates Christ’s own loving sacrifice for us. This is at the heart of St. Paul’s vision for marriage and my couple wanted to celebrate the shocking beauty of this profound, if oft misunderstood, Scripture.

Faced with such insight and passion, I couldn’t refuse their request. In fact, it inspired me to delve deeper into the context and commentary of St. Paul’s words and I discovered that, even in his own time, his words were shocking. Not to women, but to men, insofar as he challenges them to lay their life on the line for their wives. In the ancient world, this was not a normative attitude. Further, St. Paul’s vision for marriage is sacramental. The relationship of husband and wife is both a reflection of Christ’s love for his Church, but the very means by which God’s love comes into the world in a new way. Sacraments create. They bring the presence of God alive in the world in a new way. This week, St. Paul’s shocking words ought not to embarrass us, or force us to turn the page. They are a challenge to inspire us to live the love that is the gift of self. For when we see our relationships not as a means to personal fulfillment, but as the opportunity for sacrifice, God’s creative love is born anew.