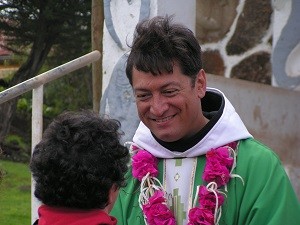 Happy Feast of St Francis! This week, we celebrate the patron and namesake of our beloved city by the bay. As a Dominican parish, we also celebrate the wonderful connection between the Franciscans and ourselves, which is rooted in the many traditional stories about St. Dominic and St. Francis. Perhaps the most legendary encounter took place in Rome around the Great Lateran Council in 1215. Remember that, at the same time Dominic was preaching in France, Francis had sparked a religious revival in Assisi, Italy. Ten years St Dominic’s junior, but already given permission to establish a mendicant Order, St. Francis traveled to Rome for this Lateran Council, where St. Dominic was endeavoring to receive official recognition for his new order of preachers. Because of their proximity at this time, there are stories of the two great reformers meeting each other and exchanging gifts. One story has Dominic giving Francis the traditional Franciscan cord; another has Francis giving Dominic a leather belt. Most accounts agree that Francis and Dominic agreed to support one another and that future generations of their successors would work together in the Lord’s vineyard.

Though there have been examples of “sibling rivalry” between Dominicans and Franciscans over the years, there are two unifying traditions that have come down to us today. The first tradition is the invitation for a member of the other Order to preach on the feast of their Founder. For example, there is a custom for a Dominican to preach in Franciscan churches on the feast of St Francis and vice versa. This year, we are adding a twist to the spirit of this exchange by inviting one of our Franciscan brothers, Fr. Francisco Nahoe, OFM Conv., to come and preach this weekend. Fr. Francisco has been a Friar Minor Conventual for 31 years and a priest for 21 years. An ethnic Polynesian, he was reared in Oregon. Having entered the Franciscan Order in California, he completed his theological studies at the Seraphicum in Rome and returned to the Province after diaconal ordination. Since then, he has worked in Catholic education, campus ministry, formation and parochial ministry. More than a decade ago, he was assigned to the historical Church of Saint Francis, now the National Shrine of Saint Francis of Assisi. At present, he is the mission promoter for the Franciscan mission in Vietnam. When I asked him if he wanted to come and revive this fraternal pulpit exchange, he enthusiastically agreed, “I love the Dominicans!” Welcome, Fr. Francisco!

The second tradition aimed at fraternal bonding is rooted in our missionary corporation. When the Dominicans and Franciscans came to the Americas to establish missions, it was the custom to erect a prominent statue of a saint from the other Order. For example, if you visit any of the California missions established by the Franciscans, you will discover the image or statue of a Dominican saint somewhere inside. Last week, I visited the Mission at Carmel to pray at the grave of the newly canonized Fr. Serra and low and behold, amid a bevy of Franciscan saints, a beautiful painting of the Dominican, St. Rose of Lima decorates the wall of the mission. For our part, see if you can find the statue of St. Francis which adorns our very own St Dominic’s. (Hint: Look left of St. Dominic as you depart!) As we celebrate the feast of our Holy Father Francis, we call down God’s blessing on our city and world as we pray that Peace Prayer often attributed to St. Francis himself: