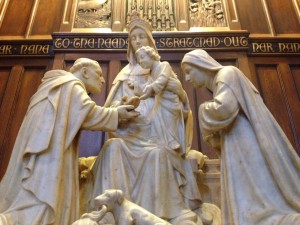 A few weeks back, I finally had time to write a short story. Joyful for this time, I spent many hours praying and thinking about God’s little gift to me.  And so, I will offer this to you during Month of the Rosary. This will be in three parts (how thomistic!)…so keep tuned.

Also, please remember that the Dominican Jubilee will kick off at our blessed abode at 10:00am with a Mass celebrated by the Master of the Order, Father Bruno Cadore, O.P.  It’s the once in a lifetime event–you will be remiss to miss it!

The moon, sleepy and hazy, gazed over the highways of Hong Kong.  A moving parking lot of cars passed by overhead, dotted with the occasional double decker bus.  Concrete, noise and light embraced her like a scratchy shawl. Alexa Rose sat on a bench outside a congee place, listening to a bunch of young dishwashers and busboys, swearing in a mix of Cantonese and English.  She took out her phone and texted a friend, asking if she were home already.

“Maybe there,” she said, dropping her phone into her purse. She crossed her arms, bowing her head in prayer.  Her rested her arm over her large rolling luggage.  Her dismissal from her host’s home was cold, yet cordial.

“To be honest, I never felt comfortable with you staying with us in the first place—your work sounds important, but it doesn’t seem particularly…,” her former host said, her voice drifting.  She opened the main door.  The concrete sidewalk looked icey grey. “Perhaps you can email one of your young adults contacts.”

“Thank you,” Alexa Rose responded, more sheepish than she had intended.  She didn’t look at her former host in the eye, but rather, at the concrete path in front of her, rolling her baggage behind her.  The door closed behind her without a sigh.

Dragging her luggage behind her, she wandered Central, pondering her options.  None of her friends responded to her texts.  Being a workday, she contented herself sitting at a cafe, emailing her friends at home, telling two of them that she was just kicked out of her housing, and boasting to the rest of how happy she was to be back on the island. Meanwhile, she would text friends in Hong Kong, asking for a place to stay for the next few weeks.  Occasionally, she would glance at her large luggage bag.  Her entire life, including three years of working for these young adults for pennies, contained in three cubic feet.

She recalled the last time she and Jordan saw each other.  He had coffee, she a tall glass of tea.  “Now this time,” he begged her, “don’t tell me of your housing situation till it’s too late. I would hate to hear of you on the streets.” The memory let Alexa Rose shake her head.  She looked down at her phone.  Still nothing.

“Heyo,” she heard besides her.

She looked over, finding one of the busboys from the restaurant looking down on her.  Lanky in posture, he held a Styrofoam bowl in one hand, and hung off the doorpost with the other, his foot swinging down towards the concrete.  His hair, black and stringy, fell near his eyebrows and flayed at the ears.  There was a gap between his front teeth.

“Hello,” she responded, “Should I leave?”

He shrugged.  “Only if you want.  I just got this for you.”  He handed her the bowl.

“Standard stuff,” he responded.  “So yeah, you have somewhere to go tonight?”  He smiled.

She thought to herself, You can fit Montana between those teeth.  “Maybe,” she grinned, opening the bowl.  She sniffed. “Mmm.  Thank you.”

“If you want company, you know,” he shrugged, “I have a guy at Lan Kwai Fong.  Clubbing, drinking…you can spend the night, if you need.”

“Aww, that’d be nice.  Let me check with my friends and see,” she responded.

He smiled at her, going back into the restaurant.

Once he went back inside, she stuck her finger into the bowl and tasted the porridge.  She grimaced and snapped the bowl shut, suspicious at its contents.  She took her luggage and walked away, tossing the congee in the trash.

Two years before, she sat across from her twin sister.  Fraternal twins, the only thing they shared in terms of looks was their blonde hair.  But even then, Zoe cut her hair pixie short, and tied it up in stubby pigtails. Meanwhile, her sister sat across from her in a long, parted ponytail, her eyes attentive.

“I just dropped the first few thousand on the duplex.  I mean, I didn’t think I would be a homeowner this quickly, but,” she hid a smile.

Alexa Rose responded, “I’m proud of you—mom must love it.”

She sighed, “Oh she does.  I think mom is lying about how many she told about Zoe being all grown up.”  She paused, drinking her coffee.  “I mean, we’re only twenty-nine, Lexi.”

Alexa Rose shrugged.  “Mom has to boast about one of us, you know.”

“It’s a nice Christmas present,” Zoe mentioned, “Telling our mother that escrow went through.”  After a small pause, she continued,     “And you know, whenever you’re done with your work over in HK, you have a place to stay.  Your own room, your own shower.  Heck—I’ll even allow you to cook.”

Her sister shut her eyes tightly and shook her head. “Wow.  That was stupid.  I’m so sorry.”

After a long pause, Alexa Rose looked at her coffee cup and drained it.  “So that Christmas present that I was talking about.”

“Um, yeah,” she responded.  “I’ll happily—joyfully—pay for a month’s worth of groceries for you, of course.”

Alexa Rose’s cell phone chimed.  Finally, she thought, flipping it out of her pocket.  Her friend, Elizabeth, texted back, “I can meet you at Saint Joseph’s right now.  Just finished adoration.”  Alexa Rose felt as though a foil of light pierced her heart.  Great!  The first thing that went right today.  Now, which MTR is that?  She answered her, “Walking there now.”

She remembered meeting Elizabeth, nearly three years ago.  Alexa Rose was finishing some research at one of the Universities on Chinese-American trade relationships for her thesis.  Needing a day out in the city, she packed up a novel, her smart phone and her Octopus card and left.  Finding herself near the Midlevel escalators, she walked around till she saw a blue building.

She paused in front of it, hitching up her backpack closer to her body.  A sign with chipping paint read “Dragon Boat Dim Sum” with a cartoony dragon boat painted underneath.  Inside the restaurant, there was a mashed assortment of plastic tables and iron chairs with red seats.  A soccer game played on a giant plasma screen.  A group of Chinese twentysomethings sat near the corner, two of them pouring over a book.  Some older folks read newspapers over cups of hot tea.  After a pause, she glanced at a menu at the entrance, already deciding to go in.  She waved to the guy behind the bar, who pointed to a table.

By the time Alexa Rose sat down, she already knew what she wanted.  When the waiter came by to drop off a boiling pot of tea, she ordered her lunch.  He nodded, his face plastic.  She disappeared into her book.

When some of her bowls had arrived, she put her book away and bowed her head in prayer.  She crossed herself and kissed her necklace crucifix, and quickly dropped food in her mouth.  She chewed slowly, feeling the ground pork and shrimp.  She tilted her head back and forth, comparing it to the shu mai that she had earlier that week.  She shrugged, and moved on.

“Excuse me?” she overheard.

Alexa Rose looked up and saw a woman her age.  She had large almond-shaped eyes and high cheekbones.  Her raven black hair flowed down past her shoulders.  She wore a pastel-pink shirt with sparkly dragons running down the front.  When Alexa Rose looked up at her, she could not help but match the large smile this woman had, feeling a breezy light emanate from her.  Alexa Rose felt like sighing.

“Up,” she said, looking at the ceiling.  She smiled, confusion painting across her face.  She looked back at Alexa Rose.  She flushed.

Whoops, Alexa Rose thought to herself, second language.  “May I help you?”

She recovered, looking back at her. “Yes, I hope so.  I saw you praying before you ate…” Her voice faded a little, her eyes resting below Alexa Rose’s chin.  “Are you a Catholic?”

“Why yes,” Alexa Rose responded, “I am.”  She felt the back of her neck prick, remembering a homily Jordan once preached.  If people ask if you are Catholic, he preached, how do we respond?  Do we tuck our crucifixes and scapulars in under our shirt, or do we boldly dress as a soldier of God?  She prepared herself for an insult, or a pointed question—something that would otherwise upset her.

“Well,” the girl flushed, looking at the floor. “Well, we’re Christians, too,” she said, motioning to the table filled with young adults.  “And when I saw you pray, I wondered if you would like to eat with us.  We’re having our Bible Study.”

Please return next Wednesday for the next installment of Star Watch!