In those days, Elijah the prophet went to Zarephath. As he arrived at the entrance of the city, a widow was gathering sticks there; he called out to her, “Please bring me a small cupful of water to drink”…Elijah said to her, “Do not be afraid. Go and do as you propose. But first make me a little cake and bring it to me. Then you can prepare something for yourself and your son. For the LORD, the God of Israel, says, ‘The jar of flour shall not go empty, nor the jug of oil run dry, until the day when the LORD sends rain upon the earth.’ ” (I Kings 17:10-16)

Jesus sat down opposite the treasury and observed how the crowd put money into the treasury. Many rich people put in large sums. A poor widow also came and put in two small coins worth a few cents. Calling his disciples to himself, he said to them, “Amen, I say to you, this poor widow put in more than all the other contributors to the treasury. For they have all contributed from their surplus wealth, but she, from her poverty, has contributed all she had, her whole livelihood.” (Mark 12:41-44)

This week, our readings feature the tale of two widows. Each in their own way tells the story of generosity in the face of want and reveals the source of thriving and abundance. First, we encounter the widow of Zarephath who is quite literally down to her last meal. The country is in the grip of one of the most intense draughts of the 9th-century BC, and without a social network of support, the woman is resigned to her starving fate. Precisely at this moment, the prophet Elijah comes upon the scene as an ambassador of the divine help and salvation. But rather than simply give the woman food and drink or direct her to a hidden, miraculous source of sustenance, in a moment infused with classic Jewish humor, Elijah asks that she provide him with water and food, “fetch me a cup of water…make me a little cake.” In Elijah’s seemingly clueless, absurd request, there is a classic spiritual principle which itself is counterintuitive: abundance flows from generosity. At the height of her vulnerability, at the depths of her struggle to survive, the widow of Zarephath’s willingness to give from her poverty links her with the source of abundance. As she shares the little she has, she taps into the power of God’s own life which always sustains and nourishes. The widow did not let her dire, hopeless circumstances control her attitude and choices. Her generosity in the face of poverty became the very source that sustained her and her son. 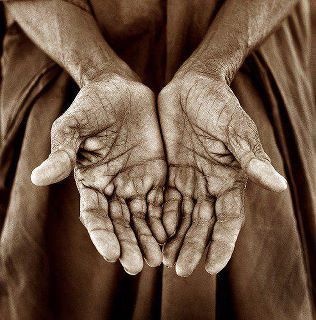 Second, in the Gospel, Jesus highlights the widow’s meager gift as an extraordinary example of divine generosity. Aware of his impending betrayal and death, Jesus enters the temple courtyard to critique the scribes and other leaders who hunt for happiness through prosperity, power and prestige. Seeking satisfaction in being in control, honored with esteem, or praised as generous philanthropists cascading with surplus wealth, each of these attempts are a sort of hoarding that severs the lifeline of true happiness. By contrast, Jesus praises the widow who gives not from excess, but from her very sustenance. The widow’s generosity is not simply a random act of kindness, but an intentional gift made to God and the community. Though Jesus does not reveal the widow’s inner thoughts or even hint at how she will be blest (like the widow of Zarephath), he does hold her act of generosity up as a window into his own act of generosity on the cross. In the person of Jesus, God gives himself to us completely. By assuming human nature, Jesus does not give from the “surplus” of his divinity: wise words, miraculous healing, powerful preaching and spectacle. His gives it all. Only when Christ is stripped of pleasure, prosperity, power and prestige on the cross can he give himself completely and so open the gates of salvation to those who follow his example. Once again, we see how life and abundance flow from a vulnerable, but willing gift. 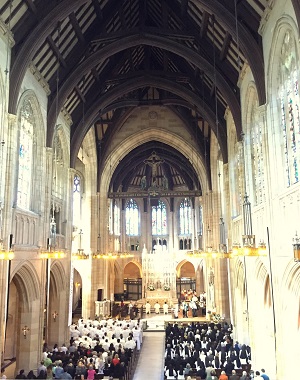 Last week, the Master of the Dominican Order, Fr. Bruno launched our 800th Jubilee by presiding at a beautiful Mass surrounded by the Dominican family and parishioners. One of the lasting images held in my memory came at the end of the Mass, when each person lit their own personal taper candle from the large Jubilee candle which was blest at the beginning of the liturgy. As the light passed from person to person, I noticed how our Dominican nuns (some of whom has not been out of the cloister in 35-40 years and had received special permission to attend!) spontaneously held their candles high aloft with much enthusiasm and gusto. Though no instruction was verbally given, since they were sitting in the front choir stalls, the rest of the congregation naturally followed suit. Proudly holding our candles high, we prayed the Jubilee prayer united in shining with the joy of Gospel. It was reminder to me of how we connect with the source of all that is good. Do you want joy in our life? Then give it. Do you want faith to increase? Then share it. Whatever it is in our life that we are lacking, wherever we are most vulnerable, it is there that God calls us not to grasp at and hoard, but to share. Like the twin widows, may we radiate the joy of the Gospel in the heart of the City.