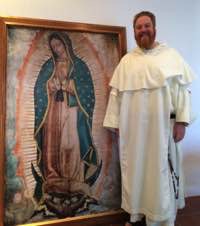 One of the treasured shrines in our Church is the replica image of Our Lady Guadalupe.  Though it has been relocated near the St. Jude shrine due to roof leaks above, it remains a magnet for prayer and devotion.  The story of Our Lady’s apparition is a powerful example of God’s mercy which we celebrate during this year of Jubilee.  It all began on December 9th, 1531 as Juan was walking to attend the early morning Mass in Mexico City.  As he traveled along, he suddenly heard the beautiful singing of birds.  Looking towards Tepeyac Hill to see where the music was coming from, he suddenly heard a young female voice affectionately calling his name, “Juanito.” Reaching the top of the hill, he saw a radiant young woman clothed in splendid light.  She told Juan that she desired him to be her messenger to the Bishop of Mexico City. Juan was to tell the bishop that she wanted a church to be built as a special place of preaching and healing.

After being put off by the bishop’s servants, Juan was finally granted an audience with Franciscan Bishop Zumarraga.  The bishop didn’t initially believe Juan Diego and asked him to return another day. So a dejected Juan returned to Tepeyac and asked the Lady to choose someone else more influential as a spokesman. She assured him that he was personally chosen to be her ambassador. So, the next day he returned to the bishop. Though impressed by Juan’s persistence, the Bishop was still had lingering doubts, so he asked for a sign from the Lady.  Upon hearing the bishop’s request, Our Lady told Juan to return the next day and she would give him a powerful sign.  Returning home, Juan found his uncle ill and close to death.  Instead of returning the next day, Juan stayed home and took care of his ailing uncle.  Early on December 12th, Juan rushed to Mexico City in order to get a priest to administer the last rites to his dying uncle.  So on his way he went around the back of Tepeyac Hill in order to avoid Our Lady: he simply did not have time to be carrying messages!

But Our Lady met him anyway telling him not to worry, his uncle was already healed. He was to learn later that at that moment Our Lady had appeared to his uncle, who was restored to health.  She urged Juan to go to the top of the hill were he would find flowers miraculously growing.  Juan was astonished to see so many vibrant flowers during the frosty time of the year.  He cut them and gathered them in his tilma (cloak).  Our Lady arranged the flowers with her own hands, rolled up the tilma and ordered Juan not to unfurl his tilma until he was in the presence of the bishop.  After being harassed by the bishop’s attendants, Juan was finally brought in to see him. After recounting every detail of his conversation with Our Lady, he let down his tilma and the flowers fell to the floor.  Juan was surprised when everyone in the room also fell to the floor on their knees. The image of Our Lady had miraculously appeared on Juan’s tilma!  Repenting for his unbelief with abundant tears, Bishop Juan Zumarraga promised to build the shrine that Our Lady had requested.

Soon the church was built and the holy image transferred.  Three aspects of this apparition resonated with the native population.  First, the lady was a young native, spoke Náhuatl, the Aztec language.  Second, Juan Diego explained that she appeared at Tepeyac, the place of Tonantzin, the mother god, sending a clear message that the Virgin Mary was the mother of the true God, a God that has care and compassion for all peoples.  Third, whereas the Aztec gods demanded human sacrifice as a means of appeasement, through the message of our Lady, the native peoples came to know and love the God who sent His own Son as a sacrifice for us.  Over the next 7 years, from 1531 to 1538, 8 million natives embraced the Catholic faith.  Even to this day, St. Juan Diego’s cloak, marvelously preserved, can still be seen behind the main altar in the new Basilica of Our Lady of Guadalupe, which is near the original Basilica site she requested.  Millions from all over Mexico and the world make their way to venerate Our Blessed Mother and to implore her intercession.

And the legacy of Our Lady continues.  I invite you during this Year of Mercy, when you are anxious or in distress, to spend a moment in quiet prayer with our Lady.  If you listen attentively, the compassionate words which Mary spoke to Juan will echo in your ears: “Am I not here, who am your Mother? Are you not under my shadow and protection? Am I not the fountain of your joy?”