St Dominic had a dream.  He dreamt that he was in Heaven, surrounded by the blessed.  The apostles, famed martyrs, doctors of the Church surrounded him.  He also noticed many members of religious congregations surrounding him.  Francis’ own sons and daughters, Carthusians, Benedictines, all of the rest.  But not one single member of his own Order of Preachers!

He began to weep.

What had happened? he thought to himself.  Were they not worthy to enter here?  Then what am I doing here?  We were sent to do such good work for the vineyard—how could this be?  He looked around again, seeing none wearing the silver and sable of the Order of Preachers.  No—none of them are here.  I am alone.

He clutched his heart, feeling sorrow overwhelm him. Tears began to well in his eyes.  In the distance, Dominic heard the footsteps of someone approaching him.  His grief overcoming, he collapsed to the floor, his hands slapping the ground.

“What is it, man?” said the voice. “Why the tears—do you not know where you are?”

“But my lord,” he said, raising his eyes to the speaker, “I do not see my brethren.”   Then, seeing the speaker’s eyes, his eyes fell to his knees. “Christ my God,” he said, trembling, “what have I done to displease Your Majesty?  Surely—did you not send me to…where are they?  Jordan?  Diana? Cecilia?  John…dearest Reginald—where are my children?”

Dominic forced his eyes to the ground feeling his throat start to constrict.  He squashed his eyes together and started to control his breathing.  I’m in the presence of the King of Hosts, he said to himself, Stupid man, get yourself together.  After two deep breaths, he opened his eyes and looked at the King’s pierced feet.  “Christ my God,” Dominic said, his voice quavering, “for whatever wrong my children have done, they were doing so under my obedience.  If you have harmed them, surely, my God, it is I who should be thrown into the dark sea of sin.”

“—No, you silly man,” the Lord responded, lifting Dominic to his feet.  “You mustn’t put the world on your shoulders.”

The Lord then pinched Dominic by the scapular and led him to the crowded throne room.  There were the Creator in Splendor, and the Spirit of unpredictable light—light that gives off merry heat—and a smaller, sapphire encrusted throne to the right of the King.

The closer Dominic came to her throne, the taller it seemed to be.  A dark blue cloak—so inky blue that it seemed almost black—cascaded down the throne and flared towards to the ground.  There she sat, the cloak draped over her shouldered as though she had worn it for all her life.  Her smile felt like mischief and love, her eyes hiding a secret ancient and new.

The Lord let go of Dominic’s scapular and walked away.  Dominic, mesmerized, could not help but gaze on the Great Lady.  He felt time die and joy arise.

Finally, with a broad smile on her face, she opened her cloak. 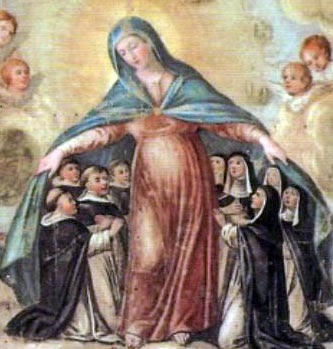 Lo!  Behold, the Silver and Sable of the Order of Preachers!  Behold Dominic’s sons and daughters!  Lost, not ever, but concealed and hidden within the quiver of so great an archer, the Great Mother of God.  She who sends the Preachers of her Son, piercing through death and heresy—exposing Light and Love of Creator Father!  Lo, glad tidings has she, to send her own arrows of Truth and Light into a World enraptured by black sin and dismay.

She who protects the Order of Preachers, the Order of Truth, in order to send them—like piercing arrows—to destroy beasts of false belief.  Through her wisdom, and guided by her Son, may the Preachers of Holy Father Dominic forever have minds sharp and eyes bright, apt to bring down the narrow beasts of heresy, and raise up the fallen into the merciful Light of Dayspring.